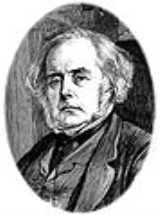 Overview
John Bright Quaker, was a British
United Kingdom of Great Britain and Ireland
The United Kingdom of Great Britain and Ireland was the formal name of the United Kingdom during the period when what is now the Republic of Ireland formed a part of it....
Radical
Radicals (UK)
The Radicals were a parliamentary political grouping in the United Kingdom in the early to mid 19th century, who drew on earlier ideas of radicalism and helped to transform the Whigs into the Liberal Party.-Background:...
and Liberal
Liberal Party (UK)
The Liberal Party was one of the two major political parties of the United Kingdom during the 19th and early 20th centuries. It was a third party of negligible importance throughout the latter half of the 20th Century, before merging with the Social Democratic Party in 1988 to form the present day...
statesman
Statesman
A statesman is usually a politician or other notable public figure who has had a long and respected career in politics or government at the national and international level. As a term of respect, it is usually left to supporters or commentators to use the term...
, associated with Richard Cobden
Richard Cobden
Richard Cobden was a British manufacturer and Radical and Liberal statesman, associated with John Bright in the formation of the Anti-Corn Law League as well as with the Cobden-Chevalier Treaty...
in the formation of the Anti-Corn Law League
Anti-Corn Law League
The Anti-Corn Law League was in effect the resumption of the Anti-Corn Law Association, which had been created in London in 1836 but did not obtain widespread popularity. The Anti-Corn Law League was founded in Manchester in 1838...
. He was one of the greatest orators of his generation, and a strong critic of British foreign policy. He sat in the House of Commons from 1843 to 1889.
Bright was born at Rochdale
Rochdale
Rochdale is a large market town in Greater Manchester, England. It lies amongst the foothills of the Pennines on the River Roch, north-northwest of Oldham, and north-northeast of the city of Manchester. Rochdale is surrounded by several smaller settlements which together form the Metropolitan...
, in Lancashire
Lancashire
Lancashire is a non-metropolitan county of historic origin in the North West of England. It takes its name from the city of Lancaster, and is sometimes known as the County of Lancaster. Although Lancaster is still considered to be the county town, Lancashire County Council is based in Preston...
, England — one of the early centres of the Industrial Revolution
Industrial Revolution
The Industrial Revolution was a period from the 18th to the 19th century where major changes in agriculture, manufacturing, mining, transportation, and technology had a profound effect on the social, economic and cultural conditions of the times...
. His father, Jacob Bright, was a much-respected Quaker, who had started a cotton mill
Cotton mill
A cotton mill is a factory that houses spinning and weaving machinery. Typically built between 1775 and 1930, mills spun cotton which was an important product during the Industrial Revolution....
at Rochdale in 1809.

I am for peace, retrenchment, and for reform&mdash;thirty years ago the great watchwords of the great Liberal Party.

Speech on 28 April, 1859. This phrase was first used by William IV' speech from the Throne on 17 November, 1830 for the Whig government of Earl Grey.

Force is no remedy.