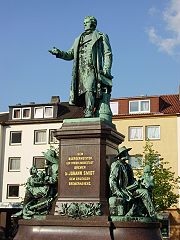 Johann Smidt was an important Bremen
Bremen
The City Municipality of Bremen is a Hanseatic city in northwestern Germany. A commercial and industrial city with a major port on the river Weser, Bremen is part of the Bremen-Oldenburg metropolitan area . Bremen is the second most populous city in North Germany and tenth in Germany.Bremen is...
politician
Politician
A politician, political leader, or political figure is an individual who is involved in influencing public policy and decision making...
, theologian, and founder of Bremerhaven
Bremerhaven
Bremerhaven is a city at the seaport of the free city-state of Bremen, a state of the Federal Republic of Germany. It forms an enclave in the state of Lower Saxony and is located at the mouth of the River Weser on its eastern bank, opposite the town of Nordenham...
.

Smidt was a son of the Reformed preacher Johann Smidt sen., pastor
Pastor
The word pastor usually refers to an ordained leader of a Christian congregation. When used as an ecclesiastical styling or title, this role may be abbreviated to "Pr." or often "Ps"....
at St. Stephen Church in Bremen. Smidt jun. studied theology
Theology
Theology is the systematic and rational study of religion and its influences and of the nature of religious truths, or the learned profession acquired by completing specialized training in religious studies, usually at a university or school of divinity or seminary.-Definition:Augustine of Hippo...
in Jena, and was one of the founders of the Gesellschaft der freien Männer (Community of free men). He was ordained Reformed preacher in Zürich
Zürich
Zurich is the largest city in Switzerland and the capital of the canton of Zurich. It is located in central Switzerland at the northwestern tip of Lake Zurich...
in 1797. He then became Professor of History at the Gymnasium illustre in his hometown. He then became 'Syndikus' (company lawyer) for the Älterleute (aldermen, Bremen's merchants corporation of constitutional rank) and in 1800 'Ratsherr' (councilman), a position in which he exerted considerable influence on the governmental and commercial development of the cities of the Hanseatic League
Hanseatic League
The Hanseatic League was an economic alliance of trading cities and their merchant guilds that dominated trade along the coast of Northern Europe...
.

In particular as he acted as Bremen's diplomatic representative at the Congress of Vienna
Congress of Vienna
The Congress of Vienna was a conference of ambassadors of European states chaired by Klemens Wenzel von Metternich, and held in Vienna from September, 1814 to June, 1815. The objective of the Congress was to settle the many issues arising from the French Revolutionary Wars, the Napoleonic Wars,...
and preserved the independence of the Hanseatic cities and put through their acceptance into the German Confederation
German Confederation
The German Confederation was the loose association of Central European states created by the Congress of Vienna in 1815 to coordinate the economies of separate German-speaking countries. It acted as a buffer between the powerful states of Austria and Prussia...
of sovereign states after the Battle of Leipzig
Battle of Leipzig
The Battle of Leipzig or Battle of the Nations, on 16–19 October 1813, was fought by the coalition armies of Russia, Prussia, Austria and Sweden against the French army of Napoleon. Napoleon's army also contained Polish and Italian troops as well as Germans from the Confederation of the Rhine...
in 1813. In the final revision of the decisions of the Congress on the rights of the Jews, Smidt - unauthorised and unconsented by the other parties - changed the text from "The confessors of Jewish faith are preserved the rights already conceded to them in the confederal states", by replacing a single word, which ensued serious consequences, into: "The confessors of Jewish faith are preserved the rights already conceded to them by the confederal states." In the Confederation's Bundesversammlung
Bundesversammlung (German Confederation)
The Federal Assembly was the only central institution of the German Confederation from 1815 until 1848, and from 1850 until 1866. The Federal Assembly had its seat in the palais Thurn und Taxis in Frankfurt...
, he battled the politics of Klemens Wenzel Lothar von Metternich, and was particularly involved in the negotiations which in 1820 established free shipping on the Weser.

Above all, he gave Bremen's commerce an important impulse through the foundation of Bremerhaven
Bremerhaven
Bremerhaven is a city at the seaport of the free city-state of Bremen, a state of the Federal Republic of Germany. It forms an enclave in the state of Lower Saxony and is located at the mouth of the River Weser on its eastern bank, opposite the town of Nordenham...
in 1827 and by closing advantageous trade agreements with foreign countries, through widening of consular representation, etc. In 1821 he became Bürgermeister of Bremen and he held this post — apart from the democratic period of 1849-1852 — until his death.

Smidt was a devout member of the Reformed church
Reformed churches
The Reformed churches are a group of Protestant denominations characterized by Calvinist doctrines. They are descended from the Swiss Reformation inaugurated by Huldrych Zwingli but developed more coherently by Martin Bucer, Heinrich Bullinger and especially John Calvin...
, then Bremen's state church, merged only in 1873 with Lutheran congregations to form today's Bremian Evangelical Church. He worked against tolerating other religions and denominations within the city. Inglorius was Smidt's anti-Judaism
Anti-Judaism
Religious antisemitism is a form of antisemitism, which is the prejudice against, or hostility toward, the Jewish people based on hostility to Judaism and to Jews as a religious group...
. As burgomaster, Smidt made the "complete expulsion of the children of Israel" an "urgent concern of the state" since 1821. Jews
Jews
The Jews , also known as the Jewish people, are a nation and ethnoreligious group originating in the Israelites or Hebrews of the Ancient Near East. The Jewish ethnicity, nationality, and religion are strongly interrelated, as Judaism is the traditional faith of the Jewish nation...
had settled within the city during its incorporation into the ephemeric Kingdom of Westphalia
Kingdom of Westphalia
The Kingdom of Westphalia was a new country of 2.6 million Germans that existed from 1807-1813. It included of territory in Hesse and other parts of present-day Germany. While formally independent, it was a vassal state of the First French Empire, ruled by Napoleon's brother Jérôme Bonaparte...
(1807-1810) and afterwards into France
First French Empire
The First French Empire , also known as the Greater French Empire or Napoleonic Empire, was the empire of Napoleon I of France...
(1810-1813), when all inhabitants had become French citizens of equal status. All this ended in 1813/1815. Since it was the French state and not the Free Hanseatic City of Bremen, which had emancipated the Jews in Bremen, the city took the altered formulation of the Viennese decisions as the legal grounds to revoke - as did a number of confederal states - the emancipation of the Jews
Jewish Emancipation
Jewish emancipation was the external and internal process of freeing the Jewish people of Europe, including recognition of their rights as equal citizens, and the formal granting of citizenship as individuals; it occurred gradually between the late 18th century and the early 20th century...
in its territory. In 1826, Smidt had met his goal with the exception of two 'Schutzjude
Schutzjude
Schutzjude was a status for German Jews granted by the imperial, princely or royal courts.Within the Holy Roman Empire, except of some eastern territories gained to the Empire in the 11th and 12th c. , Jews usually had the status as Servi camerae regis...
n' taken over from neighbouring Hanover
Kingdom of Hanover
The Kingdom of Hanover was established in October 1814 by the Congress of Vienna, with the restoration of George III to his Hanoverian territories after the Napoleonic era. It succeeded the former Electorate of Brunswick-Lüneburg , and joined with 38 other sovereign states in the German...
.http://www.gemeinden.judentum.de/bremen/index.htm

Also Bremen's Lutheran congregation, owning and using the Bremen Cathedral
Bremen Cathedral
Bremen Cathedral , dedicated to St. Peter, is a church situated in the market square in the center of Bremen, in northern Germany. The cathedral belongs to the Bremian Evangelical Church, a member of the Protestant umbrella organisation named Evangelical Church in Germany...
, experienced Smidt's steady badgering. The cathedral district, a former immunity
Sovereign immunity
Sovereign immunity, or crown immunity, is a legal doctrine by which the sovereign or state cannot commit a legal wrong and is immune from civil suit or criminal prosecution....
, used to be an extraterritorial enclave of the neighboured state of Bremen-Verden
Bremen-Verden
Bremen-Verden, formally the Duchies of Bremen and Verden , were two territories and immediate fiefs of the Holy Roman Empire, which emerged and gained Imperial immediacy in 1180...
until 1803, when it was incorporated into the Free Imperial City
Free Imperial City
In the Holy Roman Empire, a free imperial city was a city formally ruled by the emperor only — as opposed to the majority of cities in the Empire, which were governed by one of the many princes of the Empire, such as dukes or prince-bishops...
of Bremen. As burgomaster Smidt confiscated the considerable estates
Estate (law)
An estate is the net worth of a person at any point in time. It is the sum of a person's assets - legal rights, interests and entitlements to property of any kind - less all liabilities at that time. The issue is of special legal significance on a question of bankruptcy and death of the person...
of the Lutheran congregation, arguing it would be a legal non-thing, null and void. The representatives of the Lutheran congregation, led by the cathedral preacher Johann David Nicolai, started to fight for its right to exist. The fight lasted until the congregation's official recognition in 1830, asserted by a majority of Bremen's senators (government members) against the expressed will of Smidt. Smidt abused his governmental power to suppress the Lutheran congregation by way of ordinances, confiscation and public discreditation.

Smidt dedicated himself to close cooperation between the Hanseatic cities. In 'Anerkennung der Hilfe nach dem großen Hamburger Brand' (acknowledgement after the great Hamburg fire) in 1843, he was named an honorary citizen of Hamburg
Hamburg
-History:The first historic name for the city was, according to Claudius Ptolemy's reports, Treva.But the city takes its modern name, Hamburg, from the first permanent building on the site, a castle whose construction was ordered by the Emperor Charlemagne in AD 808...
.