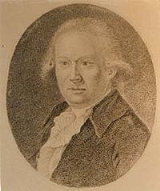 Encyclopedia
Johann Friedrich Gmelin was a German
Germany
Germany , officially the Federal Republic of Germany , is a federal parliamentary republic in Europe. The country consists of 16 states while the capital and largest city is Berlin. Germany covers an area of 357,021 km2 and has a largely temperate seasonal climate...
naturalist
Natural history
Natural history is the scientific research of plants or animals, leaning more towards observational rather than experimental methods of study, and encompasses more research published in magazines than in academic journals. Grouped among the natural sciences, natural history is the systematic study...
, botanist, entomologist, herpetologist and malacologist.

Johann Friedrich Gmelin was born as the eldest son of Philipp Friedrich Gmelin
Philipp Friedrich Gmelin
Philipp Friedrich Gmelin was a professor of botany and chemistry. He studied the chemistry of antimony and wrote texts on the pancreatic ducts, on mineral waters, and on botany....
in 1748 in Tübingen
Tübingen
Tübingen is a traditional university town in central Baden-Württemberg, Germany. It is situated south of the state capital, Stuttgart, on a ridge between the Neckar and Ammer rivers.-Geography:...
. He studied medicine under his father at University of Tübingen
Eberhard Karls University of Tübingen
Eberhard Karls University, Tübingen is a public university located in the city of Tübingen, Baden-Württemberg, Germany. It is one of Germany's oldest universities, internationally noted in medicine, natural sciences and the humanities. In the area of German Studies it has been ranked first among...
and graduated with an MD in 1769, with a thesis entitled: Irritabilitatem vegetabilium, in singulis plantarum partibus exploratam ulterioribusque experimentis confirmatam. Gmelin's thesis advisor, his father Philipp, died a few months before the thesis was completed.

In 1769, Gmelin became an adjunct professor of medicine at University of Tübingen
Eberhard Karls University of Tübingen
Eberhard Karls University, Tübingen is a public university located in the city of Tübingen, Baden-Württemberg, Germany. It is one of Germany's oldest universities, internationally noted in medicine, natural sciences and the humanities. In the area of German Studies it has been ranked first among...
. In 1773 he became professor of philosophy and adjunct professor of medicine at University of Göttingen
Georg-August University of Göttingen
The University of Göttingen , known informally as Georgia Augusta, is a university in the city of Göttingen, Germany.Founded in 1734 by King George II of Great Britain and the Elector of Hanover, it opened for classes in 1737. The University of Göttingen soon grew in size and popularity...
. He was promoted to full professor of medicine and professor of chemistry
Chemistry
Chemistry is the science of matter, especially its chemical reactions, but also its composition, structure and properties. Chemistry is concerned with atoms and their interactions with other atoms, and particularly with the properties of chemical bonds....
, botany
Botany
Botany, plant science, or plant biology is a branch of biology that involves the scientific study of plant life. Traditionally, botany also included the study of fungi, algae and viruses...
and mineralogy
Mineralogy
Mineralogy is the study of chemistry, crystal structure, and physical properties of minerals. Specific studies within mineralogy include the processes of mineral origin and formation, classification of minerals, their geographical distribution, as well as their utilization.-History:Early writing...
in 1778. He died in 1804 in Göttingen
Göttingen
Göttingen is a university town in Lower Saxony, Germany. It is the capital of the district of Göttingen. The Leine river runs through the town. In 2006 the population was 129,686.-General information:...
.

Johann Friedrich Gmelin published several textbooks in the fields of chemistry, pharmaceutical science, mineralogy and botany. He also published the 13th edition of Systema Naturae
Systema Naturae
The book was one of the major works of the Swedish botanist, zoologist and physician Carolus Linnaeus. The first edition was published in 1735...
by Carolus Linnaeus
Carolus Linnaeus
Carl Linnaeus , also known after his ennoblement as , was a Swedish botanist, physician, and zoologist, who laid the foundations for the modern scheme of binomial nomenclature. He is known as the father of modern taxonomy, and is also considered one of the fathers of modern ecology...
in 1788.

The Artemisia plant
Artemisia (plant)
Artemisia is a large, diverse genus of plants with between 200 to 400 species belonging to the daisy family Asteraceae. It comprises hardy herbs and shrubs known for their volatile oils. They grow in temperate climates of the Northern Hemisphere and Southern Hemisphere, usually in dry or semi-dry...
Gmelin's Wormwood or Artemisia gmelinii is named after him.

He discovered the Redfin Pickerel in 1789.

In the scientific field of herpetology
Herpetology
Herpetology is the branch of zoology concerned with the study of amphibians and reptiles...
he described many new species
Species
In biology, a species is one of the basic units of biological classification and a taxonomic rank. A species is often defined as a group of organisms capable of interbreeding and producing fertile offspring. While in many cases this definition is adequate, more precise or differing measures are...
of amphibians and reptiles.