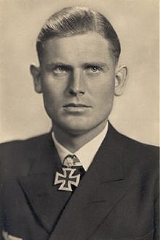 Encyclopedia
Lieutenant-Commander Joachim Schepke (8 March 1912 – 17 March 1941) was a German U-boat
U-boat
U-boat is the anglicized version of the German word U-Boot , itself an abbreviation of Unterseeboot , and refers to military submarines operated by Germany, particularly in World War I and World War II...
commander during World War II
World War II
World War II, or the Second World War , was a global conflict lasting from 1939 to 1945, involving most of the world's nations—including all of the great powers—eventually forming two opposing military alliances: the Allies and the Axis...
. He was the seventh recipient of the Knight's Cross of the Iron Cross with Oak Leaves . The Knight's Cross of the Iron Cross and its higher grade Oak Leaves was awarded by the Third Reich to recognise extreme battlefield bravery or successful military leadership. It was Germany's highest military decoration at the time of its presentation to Joachim Schepke.

Joachim Schepke had sunk 37 ships for a total of , and damaged 4 more. He was awarded the Knight's cross with Oak Leaves. Schepke, Günther Prien
Günther Prien
Lieutenant Commander Günther Prien was one of the outstanding German U-boat aces of the first part of the Second World War, and the first U-boat commander to win the Knight's Cross of the Iron Cross. Under Prien's command, the submarine sank over 30 Allied ships totaling about...
and Otto Kretschmer
Otto Kretschmer
Flotilla Admiral Otto Kretschmer was a German U-boat commander in the Second World War and later an admiral in the Bundesmarine. From September 1939 until being captured in March 1941, he sank 47 ships, a total of 274,333 tons. For this he received the Knight's Cross of the Iron Cross with Oak...
were friendly rivals in the U-boat service, and were the most famous U-boat commanders in the early years of the war, where all except Kretschmer eventually met their ends. Schepke was the favourite of these three, because in contrast to Kretschmer he was a convinced Nazi. He wrote and illustrated the book "U-Boot Fahrer von Heute" (U-Boat Men of today) in 1940 (Berlin, Deutscher Verlag 1940). In February 1941 he made a speech in the Berlin Sportpalast
Berlin Sportpalast
The Berliner Sportpalast was a multi-purpose winter sport venue and meeting hall in the Schöneberg section of Berlin. Depending on the type of event and seating configuration, the Sportpalast could hold up to 14,000 people and was for a time the biggest meeting hall in the German capital...
for thousands of Berlin schoolchildren about the U-boat war. After his death the German propaganda ministry held him as an example for German youth to follow.