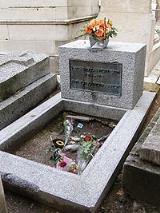 Overview
James Douglas "Jim" Morrison (December 8, 1943 – July 3, 1971) was an American musician, singer, and poet, best known as the lead singer and lyricist of the rock band The Doors
The Doors
The Doors were an American rock band formed in 1965 in Los Angeles, California, with vocalist Jim Morrison, keyboardist Ray Manzarek, drummer John Densmore, and guitarist Robby Krieger...
. Following The Doors' explosive rise to fame in 1967, Morrison developed a severe alcohol and drug dependency which culminated in his untimely death in Paris in 1971 at age 27
27 Club
The 27 Club—also occasionally known as the Forever 27 Club, Club 27 or the Curse of 27—is the title for a group of popular musicians who all died at the age of 27...
, due to a suspected heroin overdose. However, the events surrounding his death continue to be the subject of controversy, as no autopsy was performed on his body after death, and the exact cause of his death is disputed by many to this day.

Morrison was well-known for often improvising spoken word
Spoken word
Spoken word is a form of poetry that often uses alliterated prose or verse and occasionally uses metered verse to express social commentary. Traditionally it is in the first person, is from the poet’s point of view and is themed in current events....
poetry passages while the band played live.

You know the day destroys the night, Night divides the day, Tried to run — Tried to hide — Break on through to the other side!

We chased our pleasures here, Dug our treasures there, But can you still recall The time we cried? Break on through to the other side.

"Break on Through (To The Other Side)" from The Doors

It hurts to set you free, but you’ll never follow me.

Five to one, baby One in five No one here gets out alive, now You get yours, baby I'll get mine Gonna make it, baby If we try.

The old get older And the young get stronger May take a week And it may take longer They got the guns But we got the numbers Gonna win, yeah We're takin' over Come on!

At first flash of Eden, We race down to the sea. Standing there on Freedom's shore. Waiting for the sun...

This is the strangest life I’ve ever known.

Killer on the roadHis brain is squirming like a toad.