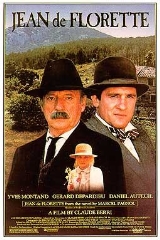 Overview
Jean de Florette is a 1986 French historical drama film directed by Claude Berri
Claude Berri
Claude Berri , born Claude Berel Langmann, was one of the great all-rounders of French cinema: an actor, writer, producer, director and distributor. "Out of my failure as an actor was born my desire to direct. Then my relative failure as a director forced me to become a producer. In order to get my...
, based on a novel by Marcel Pagnol
Marcel Pagnol
Marcel Pagnol was a French novelist, playwright, and filmmaker. In 1946, he became the first filmmaker elected to the Académie Française.-Biography:...
. It is part of a duology, and is followed by Manon des Sources. The film takes place in rural Provence
Provence
Provence ; Provençal: Provença in classical norm or Prouvènço in Mistralian norm) is a region of south eastern France on the Mediterranean adjacent to Italy. It is part of the administrative région of Provence-Alpes-Côte d'Azur...
, where two local farmers scheme to trick a newcomer out of his newly inherited property. The film starred three of France's most prominent actors – Gérard Depardieu
Gérard Depardieu
Gérard Xavier Marcel Depardieu is a French actor and filmmaker. He is a Chevalier of the Légion d'honneur, Chevalier of the Ordre national du Mérite and has twice won the César Award for Best Actor...
, Daniel Auteuil
Daniel Auteuil
Daniel Auteuil is a French film, television and theatre actor.-Early life and education:He was born in Algiers, French Algeria.-Career:...
, who won a BAFTA
British Academy of Film and Television Arts
The British Academy of Film and Television Arts is a charity in the United Kingdom that hosts annual awards shows for excellence in film, television, television craft, video games and forms of animation.-Introduction:...
award for his performance, and Yves Montand
Yves Montand
-Early life:Montand was born Ivo Livi in Monsummano Terme, Italy, the son of poor peasants Giuseppina and Giovanni Livi, a broommaker. Montand's mother was a devout Catholic, while his father held strong Communist beliefs. Because of the Fascist regime in Italy, Montand's family left for France in...
in one of the last roles before his death.

The film was shot, together with Manon des Sources, over a period of seven months.