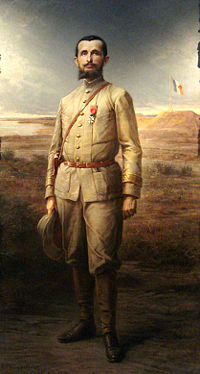 Major Jean-Baptiste Marchand (November 2, 1863 – January 13, 1934) was a French
France
The French Republic , The French Republic , The French Republic , (commonly known as France , is a unitary semi-presidential republic in Western Europe with several overseas territories and islands located on other continents and in the Indian, Pacific, and Atlantic oceans. Metropolitan France...
military officer and explorer in Africa. Marchand is best known for commanding the French expeditionary force during the Fashoda Incident
Fashoda Incident
The Fashoda Incident was the climax of imperial territorial disputes between Britain and France in Eastern Africa. A French expedition to Fashoda on the White Nile sought to gain control of the Nile River and thereby force Britain out of Egypt. The British held firm as Britain and France were on...

Marchand was born in Thoissey
Thoissey
Thoissey is a commune in the Ain department in eastern France.-Geography:The Chalaronne forms the commune's southeastern border, then flows into the Saône, which forms its western border.- Historical facts :...
, Ain
Ain
Ain is a department named after the Ain River on the eastern edge of France. Being part of the region Rhône-Alpes and bordered by the rivers Saône and Rhône, the department of Ain enjoys a privileged geographic situation...
and attended l’Ecole militaire de Saint-Maixent. He participated in the French conquest of Senegal
French conquest of Senegal
The French conquest of Senegal started from 1659 with the establishment of Saint-Louis, Senegal, followed by the French capture of the island of Gorée from the Dutch in 1677, but would only become a full-scale campaign in the 19th century....
and was severely wounded in 1889 at the capture of Diena
Diena, Mali
Diena is a small town and commune in the Cercle of Bla in the Ségou Region of southern-central Mali. As of 1998 the commune had a population of 6,831....
by the French. In 1890 he was sent to explore the sources of the Niger River
Niger River
The Niger River is the principal river of western Africa, extending about . Its drainage basin is in area. Its source is in the Guinea Highlands in southeastern Guinea...
and the Nile and to occupy the areas around Fashoda (now known as Kodok in Sudan) and bring it under French control. After a 14-month trek by foot and boat across Africa, Marchand's expedition of 20 French officers and NCOs and 130 French Senegalese troops arrived at Fashoda, an abandoned fort on the Nile, on 10 July 1898. Marchand rebuilt the fort, but the expected support from other French columns and from Abyssinia
Ethiopian Empire
The Ethiopian Empire also known as Abyssinia, covered a geographical area that the present-day northern half of Ethiopia and Eritrea covers, and included in its peripheries Zeila, Djibouti, Yemen and Western Saudi Arabia...
did not arrive and on September 11, a flotilla of British gunboats, led by Sir Herbert Kitchener, commander of the Anglo-Egyptian army that had just defeated the forces of the Mahdi
Muhammad Ahmad
Muhammad Ahmad bin Abd Allah was a religious leader of the Samaniyya order in Sudan who, on June 29, 1881, proclaimed himself as the Mahdi or messianic redeemer of the Islamic faith...
at the Battle of Omdurman
Battle of Omdurman
At the Battle of Omdurman , an army commanded by the British Gen. Sir Herbert Kitchener defeated the army of Abdullah al-Taashi, the successor to the self-proclaimed Mahdi Muhammad Ahmad...
, reached Fashoda. Both sides insisted on control of Fashoda. This led to several weeks of intense debate between Paris and London, at the end of which, Marchand was ordered to leave Fashoda to the British. He greeted his recall with extreme disgust and returned to France through Abyssinia (Fashoda Incident
Fashoda Incident
The Fashoda Incident was the climax of imperial territorial disputes between Britain and France in Eastern Africa. A French expedition to Fashoda on the White Nile sought to gain control of the Nile River and thereby force Britain out of Egypt. The British held firm as Britain and France were on...
).

Marchand later fought with French expeditionary forces in China during the 1900 Boxer Rebellion
Boxer Rebellion
The Boxer Rebellion, also called the Boxer Uprising by some historians or the Righteous Harmony Society Movement in northern China, was a proto-nationalist movement by the "Righteous Harmony Society" , or "Righteous Fists of Harmony" or "Society of Righteous and Harmonious Fists" , in China between...
. He was promoted to the rank of General in 1915 during World War I
World War I
World War I , which was predominantly called the World War or the Great War from its occurrence until 1939, and the First World War or World War I thereafter, was a major war centred in Europe that began on 28 July 1914 and lasted until 11 November 1918...
and was wounded in 1915 in the Battle of Champagne
Second Battle of Champagne
The Second Battle of Champagne was a French offensive against the invading German army beginning on 25 September 1915, part of World War I.-September 25 - October 6:...
and again in 1916 in the Battle of the Somme. He retired from the Army in 1919