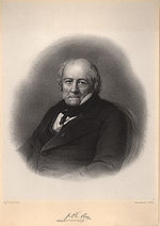 Encyclopedia
Jean-Baptiste Biot was a French
French people
The French are a nation that share a common French culture and speak the French language as a mother tongue. Historically, the French population are descended from peoples of Celtic, Latin and Germanic origin, and are today a mixture of several ethnic groups...
physicist
Physicist
A physicist is a scientist who studies or practices physics. Physicists study a wide range of physical phenomena in many branches of physics spanning all length scales: from sub-atomic particles of which all ordinary matter is made to the behavior of the material Universe as a whole...
, astronomer
Astronomer
An astronomer is a scientist who studies celestial bodies such as planets, stars and galaxies.Historically, astronomy was more concerned with the classification and description of phenomena in the sky, while astrophysics attempted to explain these phenomena and the differences between them using...
, and mathematician
Mathematician
A mathematician is a person whose primary area of study is the field of mathematics. Mathematicians are concerned with quantity, structure, space, and change....
who established the reality of meteorite
Meteorite
A meteorite is a natural object originating in outer space that survives impact with the Earth's surface. Meteorites can be big or small. Most meteorites derive from small astronomical objects called meteoroids, but they are also sometimes produced by impacts of asteroids...
s, made an early balloon flight, and studied the polarization of light.

Jean-Baptiste Biot was born in Paris, France on 21 April 1774 and died in Paris on 3 February 1862. He had one son, Edouard Constant Biot, in 1803. Biot served in the artillery
Artillery
Originally applied to any group of infantry primarily armed with projectile weapons, artillery has over time become limited in meaning to refer only to those engines of war that operate by projection of munitions far beyond the range of effect of personal weapons...
before he was appointed professor of mathematics at Beauvais
Beauvais
Beauvais is a city approximately by highway north of central Paris, in the northern French region of Picardie. It currently has a population of over 60,000 inhabitants.- History :...
in 1797. He later went on to become a professor of physics at the Collège de France
Collège de France
The Collège de France is a higher education and research establishment located in Paris, France, in the 5th arrondissement, or Latin Quarter, across the street from the historical campus of La Sorbonne at the intersection of Rue Saint-Jacques and Rue des Écoles...
around 1800, and three years later was elected as a member of the Academy of Sciences. In 1804 Biot was on board for the first scientific hot-air balloon ride with Gay-Lussac (NNDB 2009, O’Connor and Robertson 1997). Biot was also a member of the Legion of Honor; he was elected chevalier in 1814 and commander in 1849. In 1816, he was elected a foreign member of the Royal Swedish Academy of Sciences
Royal Swedish Academy of Sciences
The Royal Swedish Academy of Sciences or Kungliga Vetenskapsakademien is one of the Royal Academies of Sweden. The Academy is an independent, non-governmental scientific organization which acts to promote the sciences, primarily the natural sciences and mathematics.The Academy was founded on 2...
. In addition, Biot received the Rumford Medal [link], awarded by the Royal Society
Royal Society
The Royal Society of London for Improving Natural Knowledge, known simply as the Royal Society, is a learned society for science, and is possibly the oldest such society in existence. Founded in November 1660, it was granted a Royal Charter by King Charles II as the "Royal Society of London"...
in the field of thermal or optic properties of matter, in 1840 (O’Connor and Robertson 1997).

Jean-Baptiste Biot made many contributions to the scientific community in his lifetime – most notably in optics, magnetism, and astronomy. The Biot-Savart Law
Biot-Savart law
The Biot–Savart law is an equation in electromagnetism that describes the magnetic field B generated by an electric current. The vector field B depends on the magnitude, direction, length, and proximity of the electric current, and also on a fundamental constant called the magnetic constant...
in magnetism is named after Biot and his colleague Félix Savart
Félix Savart
Félix Savart became a professor at Collège de France in 1836 and was the co-originator of the Biot-Savart Law, along with Jean-Baptiste Biot. Together, they worked on the theory of magnetism and electrical currents. Their law was developed about 1820. The Biot-Savart Law relates magnetic fields to...
for their work in 1820. In their experiment they showed a connection between electricity and magnetism by "starting with a long vertical wire and a magnetic needle some horizontal distance apart [and showing] that running a current through the wire caused the needle to move" (Parsley).

In 1803 Biot was sent by the French Academy to report back on 3000 meteorites that fell on L’aigle, France
L'Aigle (meteorite)
-History:In the early afternoon of 26 April 1803 a meteorite shower of more than 3000 fragments fell upon the town of L'Aigle in Normandy . Upon hearing of this event the French Academy of Sciences sent the young scientist Jean-Baptiste Biot, to investigate that spectacular fall of stones...
. He found that the meteorites, or stones at the time, were from outer space. With his report, Biot helped support Ernst Florens Friedrich Chladni's argument that meteorites were debris from space, which he had published in 1794.
Biot also helped further the field of optics in 1815 with a study in polarized light. In his experiment Biot studied the effects of polarized light as it penetrated organic substances and determined that light "could be rotated clockwise or counterclockwise, dependent upon the optical axis of the material" (Molecular).

Prior to Biot's thorough investigation of the meteorites that fell near l’Aigle, France in 1803, very few truly believed that rocks found on Earth could have extraterrestrial origins. There were anecdotal tales of unusual rocks found on the ground after fireballs had been seen in the sky, but such stories were often dismissed as fantasy. Serious debate concerning the unusual rocks began in 1794 when German physicist Chladni published a book claiming that rocks had an extraterrestrial origin (Westrum). Only after Biot was able to analyze the rocks at l’Aigle was it commonly accepted that the fireballs seen in the sky were meteors falling through the atmosphere. Since Biot's time, analysis of meteorites has resulted in accurate measurements of the chemical composition of the solar system. The composition and position of meteors in the solar system have also given astronomers clues as to how the solar system formed.

In 1812, Biot turned his attention to the study of optics
Optics
Optics is the branch of physics which involves the behavior and properties of light, including its interactions with matter and the construction of instruments that use or detect it. Optics usually describes the behavior of visible, ultraviolet, and infrared light...
, particularly the polarization of light. Prior to the 19th century, light was believed to consist of discrete packets called corpuscles. During the early 19th century, many scientists began to disregard the corpuscular theory
Corpuscular theory
In optics, corpuscular theory of light, set forward by Sir Isaac Newton, states that light is made up of small discrete particles called "corpuscles" which travel in a straight line with a finite velocity and possess kinetic energy....
in favor of the wave theory of light. Biot began his work on polarization to show that the results he was obtaining could appear only if light were made of corpuscles. His work in chromatic polarization and rotary polarization
Rotary polarization
Rotary polarization is an optical phenomenon occurring in certain crystalline materials. The vibrational direction of light passing through such a crystal is rotated so that it varies in a circular manner. The amount of polarization rotation depends on the thickness of the crystal...
greatly advanced the field of optics, although it was later shown that his findings could also be obtained using the wave theory of light (Frankel).
Biot's work on the polarization of light has led to many breakthroughs in the field of optics. Liquid crystal displays (LCDs), such as television and computer screens, use light that is polarized by a filter as it enters the liquid crystal, to allow the liquid crystal to modulate the intensity of the transmitted light. This happens as the liquid crystal's polarisation varies in response to an electric control signal applied across it. Polarizing filters
Polarizer
A polarizer is an optical filter that passes light of a specific polarization and blocks waves of other polarizations. It can convert a beam of light of undefined or mixed polarization into a beam with well-defined polarization. The common types of polarizers are linear polarizers and circular...
are used extensively in photography to cut out unwanted reflections or to enhance reflection.