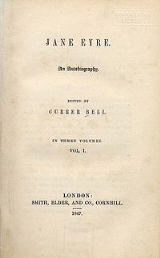 Overview
Jane Eyre icon is a novel by English writer Charlotte Brontë
Charlotte Brontë
Charlotte Brontë was an English novelist and poet, the eldest of the three Brontë sisters who survived into adulthood, whose novels are English literature standards...
. It was published in London
London
London is the capital city of :England and the :United Kingdom, the largest metropolitan area in the United Kingdom, and the largest urban zone in the European Union by most measures. Located on the River Thames, London has been a major settlement for two millennia, its history going back to its...
, England, in 1847 by Smith, Elder & Co.
Smith, Elder & Co.
Smith, Elder & Co. was a firm of British publishers who were most noted for the works they published in the 19th century.The firm was founded by George Smith and Alexander Elder and successfully continued by George Murray Smith .They are notable for producing the first edition of the Dictionary...
with the title Jane Eyre. An Autobiography under the pen name "Currer Bell." The first American edition was released the following year by Harper & Brothers
Harper & Brothers
Harper is an American publishing house, the flagship imprint of global publisher HarperCollins.-History:James Harper and his brother John, printers by training, started their book publishing business J. & J. Harper in 1817. Their two brothers, Joseph Wesley Harper and Fletcher Harper, joined them...
of New York. The Penguin edition describes it as an "influential feminist text" because of its in-depth exploration of a strong female character's feelings.

Why did Jane return to Thornfield after teaching at the Morton school?
More

Paid $700,000 in my Liberty Reserve from GleenManagement