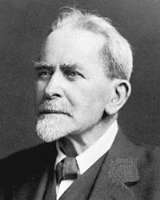 Overview
Sir James George Frazer (1 January 1854, Glasgow
Glasgow
Glasgow is the largest city in Scotland and third most populous in the United Kingdom. The city is situated on the River Clyde in the country's west central lowlands...
– 7 May 1941, Cambridge), was a Scottish social anthropologist influential in the early stages of the modern studies of mythology
Mythology
The term mythology can refer either to the study of myths, or to a body or collection of myths. As examples, comparative mythology is the study of connections between myths from different cultures, whereas Greek mythology is the body of myths from ancient Greece...
and comparative religion
Comparative religion
Comparative religion is a field of religious studies that analyzes the similarities and differences of themes, myths, rituals and concepts among the world's religions...
. He is often considered to be the father of modern anthropology.

His most famous work, The Golden Bough
The Golden Bough
The Golden Bough: A Study in Magic and Religion is a wide-ranging, comparative study of mythology and religion, written by Scottish anthropologist Sir James George Frazer . It first was published in two volumes in 1890; the third edition, published 1906–15, comprised twelve volumes...
(1890), documents and details similar magical and religious beliefs across the globe. Frazer posited that human belief progressed through three stages: primitive magic, replaced by religion, in turn replaced by science.
Born in Glasgow, Frazer attended school at Springfield Academy and Larchfield Academy
Larchfield Academy
Larchfield Academy was a preparatory school for boys in Helensburgh, Scotland.It was founded in 1845. Among its famous pupils were Sir James Frazer and John Logie Baird. In the late 1920s and early 1930s Cecil Day-Lewis and W. H...
in Helensburgh
Helensburgh
Helensburgh is a town in Argyll and Bute, Scotland. It lies on the north shore of the Firth of Clyde and the eastern shore of the entrance to the Gareloch....
.

The heaviest calamity in English history, the breach with America, might never have occurred if George the Third had not been an honest dullard.

By religion, then, I understand a propitiation or conciliation of powers superior to man which are believed to direct and control the course of nature and of human life.

If the test of truth lay in a show of hands or a counting of heads, the system of magic might appeal, with far more reason than the Catholic Church, to the proud motto, Quod semper, quod ubique, quod ab omnibus (Always, everywhere, and by all), as the sure and certain credential of its own infallibility.

It is a common rule with primitive people not to waken a sleeper, because his soul is away and might not have time to get back; so if the man wakened without his soul, he would fall sick. If it is absolutely necessary to rouse a sleeper, it must be done very gradually, to allow the soul time to return.

The awe and dread with which the untutored savage contemplates his mother-in-law are amongst the most familiar facts of anthropology.

The danger, however, is not less real because it is imaginary; imagination acts upon man as really does gravitation, and may kill him as certainly as a dose of prussic acid.

The world cannot live at the level of its great men.