James Duffield Harding (1798 - 4 December 1863), English
England
England is a country that is part of the United Kingdom. It shares land borders with Scotland to the north and Wales to the west; the Irish Sea is to the north west, the Celtic Sea to the south west, with the North Sea to the east and the English Channel to the south separating it from continental...
landscape painter
Landscape art
Landscape art is a term that covers the depiction of natural scenery such as mountains, valleys, trees, rivers, and forests, and especially art where the main subject is a wide view, with its elements arranged into a coherent composition. In other works landscape backgrounds for figures can still...
, was the son of an artist, and took to the same vocation at an early age, although he had originally been destined for the law. He first studied painting and engraving, and then took up watercolor.

He was in the main a watercolor painter and a lithographer, but he produced various oil paintings both at the beginning and towards the end of his career. He frequently contributed to the exhibitions of the Water-Colour Society, of which he became an associate in 1821, and a full member in 1822. He was also very largely engaged in teaching, and published several books developing his views of art – amongst others: 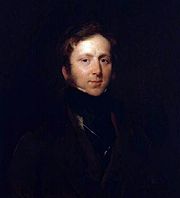 Harding was noted for facility, sureness of hand, nicety of touch, and the various qualities which go to make up an elegant, highly trained, and accomplished sketcher from nature, and composer of picturesque landscape material; he was particularly skillful in the treatment of foliage. He was the inventor of “Harding's papers” (paper in different tints and textures for sketching).

He received two gold medals from the Academie des Beaux-Arts
Académie des beaux-arts
The Académie des Beaux-Arts is a French learned society. It is one of the five academies of the Institut de France.It was created in 1795 as the merger of the:* Académie de peinture et de sculpture...
for his lithographic plates. Among his works in lithography are Home and Abroad (1836, fifty plates), Park and Forest (see above) and Picturesque Selections (1861).