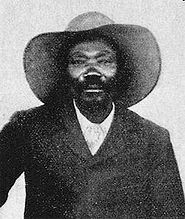 Jakobus Marenga, also "Jacobus," known as the "black Napoleon," born c. 1875, died September 20, 1907, was an important figure in Namibia
Namibia
Namibia, officially the Republic of Namibia , is a country in southern Africa whose western border is the Atlantic Ocean. It shares land borders with Angola and Zambia to the north, Botswana to the east and South Africa to the south and east. It gained independence from South Africa on 21 March...
, then the German colony of German South-West Africa
German South-West Africa
German South West Africa was a colony of Germany from 1884 until 1915, when it was taken over by South Africa and administered as South West Africa, finally becoming Namibia in 1990...
. He was chief leader in the insurrection against Germany
Germany
Germany , officially the Federal Republic of Germany , is a federal parliamentary republic in Europe. The country consists of 16 states while the capital and largest city is Berlin. Germany covers an area of 357,021 km2 and has a largely temperate seasonal climate...
which took place between 1904 and 1908, called the "Namakrieg," and was best known for forging an alliance between the rival Herero and Namaqua
Namaqua
Nama are an African ethnic group of South Africa, Namibia and Botswana. They traditionally speak the Nama language of the Khoe-Kwadi language family, although many Nama now speak Afrikaans. The Nama are the largest group of the Khoikhoi people, most of whom have largely disappeared as a group,...
tribes.

Before the Namakrieg, Morenga had participated in smaller, more localized insurrections which were taking place across German South-West Africa. Through these, Marenga (Marenga means Kings in Otjiherero) proved himself to be an able tactician. However, it was through his three years of leadership of the anti-German guerrilla forces that Morenga gained the majority of his reputation. It often proved difficult for Morenga to maintain proper control of his armies, as their preferred methods of attack differed fundamentally. The Herero sought direct and open combat with German forces, while the Namaqua preferred more guerrilla-like tactics. However, the diverse methods of attack used by Morenga's forces were enough to force a special election in the German Reichstag
Reichstag (German Empire)
The Reichstag was the parliament of the North German Confederation , and of the German Reich ....
, due to the relatively heavy losses suffered by German troops.

After his battles against German troops, Morenga was imprisoned by British forces. However, he was released a short time later under the condition that he never return to German South-West Africa again. Despite this, he again ventured into German South-West Africa by crossing the Orange River
Orange River
The Orange River , Gariep River, Groote River or Senqu River is the longest river in South Africa. It rises in the Drakensberg mountains in Lesotho, flowing westwards through South Africa to the Atlantic Ocean...
. He soon began the task of assembling an army of native peoples to once again attack German troops. He gathered together the now-dispersed tribes of the Herero, Namaqua, and Witboois, leading them into battle against the German occupation.

Morenga gained a reputation within the German army as a strategic genius and a noble fighter, earning him his nickname, "the Black Napoleon" (German: der schwarze Napoleon). In May 1906, after the climactic Battle of Rooysvlei, Morenga was again forced to leave German South-West Africa, fleeing to South Africa
South Africa
The Republic of South Africa is a country in southern Africa. Located at the southern tip of Africa, it is divided into nine provinces, with of coastline on the Atlantic and Indian oceans...
. He retreated to the Kalahari desert
Desert
A desert is a landscape or region that receives an extremely low amount of precipitation, less than enough to support growth of most plants. Most deserts have an average annual precipitation of less than...
, where he planned further insurrections against German troops. However, Morenga was traced through cooperation between German troops and British police, and was eventually shot and killed in a battle between his forces and the combined German-British forces, on September 20, 1907 at Eenzaamheid.

Uwe Timm
Uwe Timm
-Life and work:Uwe Timm was the youngest son in his family. His brother, 16 years his senior, was a soldier in the Waffen SS and died in Ukraine in 1943...
's 1973 novel Morenga revolves around Marenga's insurrection.
The source of this article is wikipedia, the free encyclopedia.  The text of this article is licensed under the GFDL.