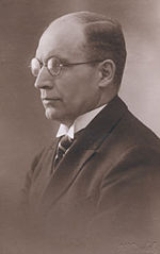 Encyclopedia
Jüri Uluots was an Estonia
Estonia
Estonia , officially the Republic of Estonia , is a state in the Baltic region of Northern Europe. It is bordered to the north by the Gulf of Finland, to the west by the Baltic Sea, to the south by Latvia , and to the east by Lake Peipsi and the Russian Federation . Across the Baltic Sea lies...
n prime minister, journalist, prominent attorney
Lawyer
A lawyer, according to Black's Law Dictionary, is "a person learned in the law; as an attorney, counsel or solicitor; a person who is practicing law." Law is the system of rules of conduct established by the sovereign government of a society to correct wrongs, maintain the stability of political...
and distinguished Professor and Dean of the Faculty of Law at the University of Tartu
University of Tartu
The University of Tartu is a classical university in the city of Tartu, Estonia. University of Tartu is the national university of Estonia; it is the biggest and highest-ranked university in Estonia...
.

Uluots was born in Lihula
Lihula
Lihula is a town in Estonia with population of 1,614 . It is a centre of a rural municipality in Lääne County.The castle of Leal was first mentioned in 1211. It was the centre of Diocese Saare-Lääne...
in 1890 and studied law at St. Petersburg University in 1910 – 1918. He subsequently taught Roman
Roman law
Roman law is the legal system of ancient Rome, and the legal developments which occurred before the 7th century AD — when the Roman–Byzantine state adopted Greek as the language of government. The development of Roman law comprises more than a thousand years of jurisprudence — from the Twelve...
and Estonian law at the University of Tartu until 1944. Uluots was also an editor of the Kaja newspaper from 1919–1920, and editor-in-chief of Postimees
Postimees
Postimees is an Estonian daily newspaper. It was established in 1 January 1857 by Johann Voldemar Jannsen and became Estonia's first daily newspaper in 1891....
from 1937–38.

Uluots was elected to the Riigikogu
Riigikogu
The Riigikogu is the unicameral parliament of Estonia. All important state-related questions pass through the Riigikogu...
, the Estonian parliament, for 1920–1926, and from 1929 through 1932. He was speaker of the Riigivolikogu (lower chamber) from 4 April 1938 to 14 October 1939. Uluots then served as prime minister from 1939 until June 1940 when Soviet troops entered Estonia
Occupation of Baltic Republics
The occupation of the Baltic states refers to the military occupation of the three Baltic states: Estonia, Latvia and Lithuania by the Soviet Union under the auspices of the Molotov–Ribbentrop Pact on 14 June 1940 followed by their incorporation into the USSR as constituent republics, unrecognised...
and installed a new Soviet puppet government led by Johannes Vares
Johannes Vares
Johannes Vares , commonly known as Johannes Vares Barbarus, was an Estonian poet, doctor, and politician.Vares was born in Heimtali, now in Pärsti Parish, Viljandi County, and educated at Pärnu Gymnasium...
, whereas Uluots' constitutional government went underground (and later, in exile
Exile
Exile means to be away from one's home , while either being explicitly refused permission to return and/or being threatened with imprisonment or death upon return...
). The communist puppet government was never recognized by the United States
Stimson Doctrine
The Stimson Doctrine is a policy of the United States federal government, enunciated in a note of January 7, 1932, to Japan and China, of non-recognition of international territorial changes that were executed by force. The doctrine was an application of the principle of ex injuria jus non oritur...
, United Kingdom and other western powers who considered it, and the August 1940 annexation of Estonia into USSR, illegal
.

After the Estonian President Konstantin Päts
Konstantin Päts
Konstantin Päts VR I/1 and III/1 was the most influential politician of interwar Estonia. He was one of the first Estonians to become active in politics and started an almost 40-year political rivalry with Jaan Tõnisson, first through journalism with his newspaper Teataja, later through politics...
was arrested by Soviet occupation forces and deported to Russia
Russia
Russia or , officially known as both Russia and the Russian Federation , is a country in northern Eurasia. It is a federal semi-presidential republic, comprising 83 federal subjects...
in July 1940, Professor Uluots became prime minister in the duties of the president as dictated by the Estonian constitution. When the Nazis invaded Soviet-occupied Estonia in 1941 the communist government was overthrown.

In January 1944, the front was pushed back by the Soviet Army almost all the way to the former Estonian border. Narva
Narva
Narva is the third largest city in Estonia. It is located at the eastern extreme point of Estonia, by the Russian border, on the Narva River which drains Lake Peipus.-Early history:...
was evacuated. Jüri Uluots delivered a radio address that implored all able-bodied men born from 1904 through 1923 to report for military service (Before this, Uluots had opposed Estonian mobilization.) The call drew support from all across the country: 38.000 draftees appeared at registration centers. Several thousand Estonians who had joined the Finnish army came back across the Gulf of Finland
Gulf of Finland
The Gulf of Finland is the easternmost arm of the Baltic Sea. It extends between Finland and Estonia all the way to Saint Petersburg in Russia, where the river Neva drains into it. Other major cities around the gulf include Helsinki and Tallinn...
to join the newly formed Territorial Defense Force, assigned to defend Estonia against the Soviet advance. It was hoped that by engaging in such a war Estonia would be able to attract Western support for the cause of Estonia's independence from the USSR and thus ultimately succeed in achieving independence. As the Germans retreated in September, 1944, Uluots appointed a new government, headed by Otto Tief
Otto Tief
Otto Tief was a lawyer, an Estonian military commander during the Estonian War of Independence and a politician. He was Acting Prime Minister of the last government of Estonia before Soviet troops occupied Estonia in 1944...
.

On 20 September the Estonian national government was proclaimed, Estonian forces seized the government buildings in Toompea
Toompea
Toompea is a limestone hill in the central part of the city of Tallinn, the capital of Estonia. The hill is an oblong tableland, which measures about 400 by 250 metres, has an area of and is about 20–30 metres higher than the surrounding areas...
and ordered the German forces to leave.

Tief's government left Tallinn prior to the Soviet army
Soviet Army
The Soviet Army is the name given to the main part of the Armed Forces of the Soviet Union between 1946 and 1992. Previously, it had been known as the Red Army. Informally, Армия referred to all the MOD armed forces, except, in some cases, the Soviet Navy.This article covers the Soviet Ground...
's arrival and went into hiding. But most of the cabinet members were later arrested and suffered various repressions by the Soviet authorities, or were sent to labour camps in Siberia
Siberia
Siberia is an extensive region constituting almost all of Northern Asia. Comprising the central and eastern portion of the Russian Federation, it was part of the Soviet Union from its beginning, as its predecessor states, the Tsardom of Russia and the Russian Empire, conquered it during the 16th...
. The remainder of the government fled to Stockholm
Stockholm
Stockholm is the capital and the largest city of Sweden and constitutes the most populated urban area in Scandinavia. Stockholm is the most populous city in Sweden, with a population of 851,155 in the municipality , 1.37 million in the urban area , and around 2.1 million in the metropolitan area...
, Sweden, where it operated in exile
Estonian Government in Exile
The Estonian Government in Exile refers to the formally declared governmental authority of the Republic of Estonia in exile, existing from 1953 until the reestablishment of Estonian sovereignty over Estonian territory in 1992...
from 1944 to 1992 when Heinrich Mark
Heinrich Mark
Heinrich Mark was born on October 1, 1911, in Krootuse, Kõlleste Parish, now in Põlva County, Estonia. He died on August 2, 2004, in Stockholm, Sweden....
, who was prime minister in duties of the president, presented his credentials to incoming president Lennart Meri
Lennart Meri
Lennart Georg Meri was a writer, film director and statesman who served as the second President of Estonia from 1992 to 2001. Meri was a leader of the Estonian independence movement.-Early life:...
.

Uluots died shortly after arriving in Sweden in 1945.