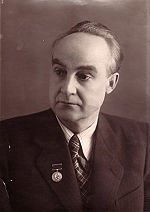 Ivan Dmitrievich Vasilenko , was a Russian
Russian language
Russian is a Slavic language used primarily in Russia, Belarus, Uzbekistan, Kazakhstan, Tajikistan and Kyrgyzstan. It is an unofficial but widely spoken language in Ukraine, Moldova, Latvia, Turkmenistan and Estonia and, to a lesser extent, the other countries that were once constituent republics...
Soviet children's books author
Author
An author is broadly defined as "the person who originates or gives existence to anything" and that authorship determines responsibility for what is created. Narrowly defined, an author is the originator of any written work.-Legal significance:...
.


The literary career of Ivan Vasilenko

The literary talent of Vasilenko was discovered by Russian writer Vikenty Veresaev in 1937. All of his tales and stories written for 30 years of creative life, such as Magic Box, Childhood of the Actor, The Little Mouse, The Gordian Knot, Cocks, Green Trunk, Golden Shoes, Sunrise is only Once a Day, Merimes Watch, Family Council, Misha and Masha and others, were reissued by local, republican and central publishing houses and used large popularity both for children and for adults.

In 1949, Vasilenko was awarded a State Stalin Prize
USSR State Prize
The USSR State Prize was the Soviet Union's state honour. It was established on September 9, 1966. After the breakup of the Soviet Union, the prize was followed up by the State Prize of the Russian Federation....
for the story "The Little Star" about life of trade school’s students. Many books have been translated into 27 languages of USSR nations, and into Czech
Czech language
Czech is a West Slavic language with about 12 million native speakers; it is the majority language in the Czech Republic and spoken by Czechs worldwide. The language was known as Bohemian in English until the late 19th century...
, German
German language
German is a West Germanic language, related to and classified alongside English and Dutch. With an estimated 90 – 98 million native speakers, German is one of the world's major languages and is the most widely-spoken first language in the European Union....
, Polish
Polish language
Polish is a language of the Lechitic subgroup of West Slavic languages, used throughout Poland and by Polish minorities in other countries...
, Bulgarian
Bulgarian language
Bulgarian is an Indo-European language, a member of the Slavic linguistic group.Bulgarian, along with the closely related Macedonian language, demonstrates several linguistic characteristics that set it apart from all other Slavic languages such as the elimination of case declension, the...
, Romanian
Romanian language
Romanian Romanian Romanian (or Daco-Romanian; obsolete spellings Rumanian, Roumanian; self-designation: română, limba română ("the Romanian language") or românește (lit. "in Romanian") is a Romance language spoken by around 24 to 28 million people, primarily in Romania and Moldova...
, Vietnamese
Vietnamese language
Vietnamese is the national and official language of Vietnam. It is the mother tongue of 86% of Vietnam's population, and of about three million overseas Vietnamese. It is also spoken as a second language by many ethnic minorities of Vietnam...
, French
French language
French is a Romance language spoken as a first language in France, the Romandy region in Switzerland, Wallonia and Brussels in Belgium, Monaco, the regions of Quebec and Acadia in Canada, and by various communities elsewhere. Second-language speakers of French are distributed throughout many parts...
and English
English language
English is a West Germanic language that arose in the Anglo-Saxon kingdoms of England and spread into what was to become south-east Scotland under the influence of the Anglian medieval kingdom of Northumbria...
languages. His works The Little Star, Artyomka in the Circus, Magic Box, Golden Shoes were filmed and released as motion pictures.

He died in Taganrog
Taganrog
Taganrog is a seaport city in Rostov Oblast, Russia, located on the north shore of Taganrog Bay , several kilometers west of the mouth of the Don River. Population: -History of Taganrog:...
on May 26, 1966. 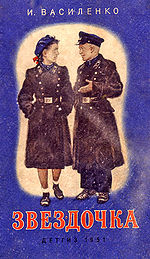