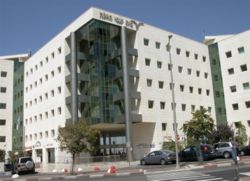 The Israel Central Bureau of Statistics , abbreviated CBS, is an Israel
Israel
The State of Israel is a parliamentary republic located in the Middle East, along the eastern shore of the Mediterranean Sea...
i government office established in 1949 to carry out research and publish statistical data on all aspects of Israeli life, including population, society, economy, industry, education and physical infrastructure.

The CBS is headquartered in the Givat Shaul
Givat Shaul
Givat Shaul is a neighborhood in western Jerusalem named after the Rishon Lezion, Rabbi Yaakov Shaul Elyashar, the Sephardi Chief Rabbi of Israel, and not, as commonly believed, for the biblical King Saul, whose capital was probably located on the hill Gibeah of Saul near Pisgat Ze'ev, on the way...
neighborhood of Jerusalem, with another branch in Tel Aviv
Tel Aviv
Tel Aviv , officially Tel Aviv-Yafo , is the second most populous city in Israel, with a population of 404,400 on a land area of . The city is located on the Israeli Mediterranean coastline in west-central Israel. It is the largest and most populous city in the metropolitan area of Gush Dan, with...
.

Government ministries use the data collected by CBS for policymaking, planning and tracking development. The data is also made available to academic research institutions and the general public.

The work of the CBS follows internationally accepted standards which enable comparison of statistical information with other countries. It gathers current, monthly, quarterly and annually data on the national economy (production, consumption, capital formation, labour productivity, savings), the balance of payments and foreign trade, the activity of different economic branches (agriculture, manufacturing, construction, transport, commerce and services, etc.), the price of goods and services, the population, family size, employment, education, health, crime, government services and more. The CBS also conducts a Census of Population and Housing every ten years, as well as periodic and one-time surveys on a variety of subjects.

The work of CBS is overseen by the Public Commission of Statistics. The data is disseminated in
a wide variety of publications, among them the Statistical Abstract of Israel. Current and updated statistical information is brought to the public's knowledge through daily press releases.