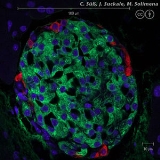 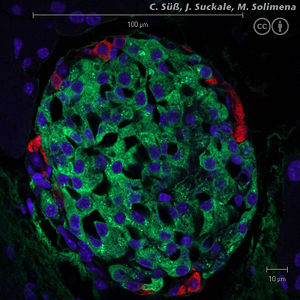 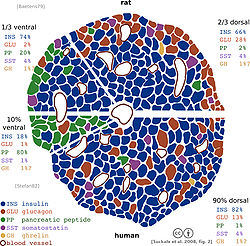 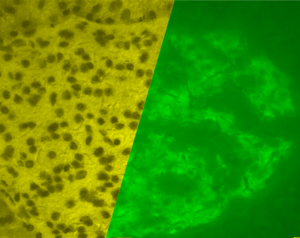 The islets of Langerhans are the regions of the pancreas
Pancreas
The pancreas is a gland organ in the digestive and endocrine system of vertebrates. It is both an endocrine gland producing several important hormones, including insulin, glucagon, and somatostatin, as well as a digestive organ, secreting pancreatic juice containing digestive enzymes that assist...
that contain its endocrine (i.e., hormone-producing) cells. Discovered in 1869 by German pathological anatomist Paul Langerhans
Paul Langerhans
Paul Langerhans was a German pathologist, physiologist and biologist.-Eponymous terms:* Islets of Langerhans - Pancreatic cells which produce insulin...
at the age of 22, the islets of Langerhans constitute approximately 1 to 2% of the mass of the pancreas. There are about one million islets in a healthy adult human pancreas, which are distributed throughout the organ; their combined mass is 1 to 1.5 grams.

Hormones produced in the islets of Langerhans are secreted directly into the blood flow by (at least) five different types of cells. In rat islets, endocrine cell subsets are distributed as follows:


It has been recognized that the cytoarchitecture of pancreatic islets differs between species.
In particular, while rodent islets are characterized by a predominant proportion of insulin-producing beta cells in the core of the cluster and by scarce alpha, delta and PP cells in the periphery, human islets display alpha and beta cells in close relationship with each other throughout the cluster.

Islets can influence each other through paracrine and autocrine communication, and beta cells are coupled electrically to other beta cells (but not to other cell types).

The paracrine feedback system of the islets of Langerhans has the following structure:

Electrical activity of pancreatic islets has been studied using patch clamp
Patch clamp
The patch clamp technique is a laboratory technique in electrophysiology that allows the study of single or multiple ion channels in cells. The technique can be applied to a wide variety of cells, but is especially useful in the study of excitable cells such as neurons, cardiomyocytes, muscle...
techniques, and it has turned out that the behavior of cells in intact islets differs significantly from the behavior of dispersed cells.


Islet transplantation as a treatment for type 1 diabetes

Because the beta cells in the islets of Langerhans are selectively destroyed by an autoimmune process in type 1 diabetes, clinicians and researchers are actively pursuing islet transplantation as a means of restoring physiological beta cell function in patients with type 1 diabetes.

Recent clinical trials have shown that insulin independence and improved metabolic control can be reproducibly obtained after transplantation of cadaveric donor islets into patients with unstable type 1 diabetes.

An alternative source of beta cell
Beta cell
Beta cells are a type of cell in the pancreas located in the so-called islets of Langerhans. They make up 65-80% of the cells in the islets.-Function:...
s, such insulin-producing cells derived from adult stem cell
Adult stem cell
Adult stem cells are undifferentiated cells, found throughout the body after embryonic development, that multiply by cell division to replenish dying cells and regenerate damaged tissues...
s or progenitor cell
Progenitor cell
A progenitor cell is a biological cell that, like a stem cell, has a tendency to differentiate into a specific type of cell, but is already more specific than a stem cell and is pushed to differentiate into its "target" cell...
s would contribute to overcoming the current shortage of donor organs for transplantation. The field of regenerative medicine is rapidly evolving and offers great hope for the nearest future. However, type 1 diabetes is the result of the autoimmune destruction of beta cells in the pancreas. Therefore, an effective cure will require a sequential, integrated approach that combines adequate and safe immune interventions with beta cell regenerative approaches.

Another potential source of beta cell
Beta cell
Beta cells are a type of cell in the pancreas located in the so-called islets of Langerhans. They make up 65-80% of the cells in the islets.-Function:...
s may be xenotransplantation
Xenotransplantation
Xenotransplantation , is the transplantation of living cells, tissues or organs from one species to another. Such cells, tissues or organs are called xenografts or xenotransplants...
. The most likely source for xenogeneic islets for transplantation into human currently under evaluation is the pig pancreas. Interestingly, human and porcine insulin differ only for one aminoacid, and insulin extracted from porcine pancreata has been used for the treatment of patients with diabetes before the development of recombinant human insulin technology. Several studies in small and large animals models have shown that transplantation of islet cells across species is possible. However, several problems need to be overcome for porcine islet transplantation to become a viable clinical option. The immunogenicity of xenogeneic tissues may be different from and even stronger than allogeneic tissues. For instance, Galalpha1-3Galbeta1-4GlcNAc (alpha galactosidase, alpha-Gal) expressed on porcine cells represents a major barrier to xenotransplantation being the target of preformed antibodies present in human blood. Remarkable progress has been recorded in the development of genetically modified pigs lacking or overexpressing molecules that may improve acceptance of transplanted tissues across into humans. Pigs lacking alpha-Gal or overexpressing human Decay Accelerating Factor (hDAF), amongst others, have been generated to study the impact on transplanted outcome in nonhuman primate models. Another limitation is the risk for transmission of zoonotic infections from pigs to humans, particularly from Porcine Endogenous Retro-Viruses (PERV). Amongst the approaches proposed to overcome islet xenorejection is immunoisolation
Immunoisolate
In general, immunoisolation is the process of protecting implanted material such as biopolymers, cells, or drug release carriers from an immune reaction. The most prominent means of accomplishing this is through the use of encapsulation....
of the clusters using encapsulation techniques that may shield them from immune attack. Studies in rodents and large animals have shown great promise that justify cautious optimism for the near future. Nonrandomized, uncontrolled pilot clinical trials are current ongoing in subject with insulin-requiring diabetes to test the efficacy of encapsulation techniques to protect xenogeneic islets in the absence of chronic anti-rejection drugs.