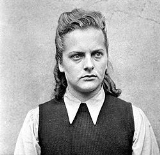 Grese was convicted for crimes against humanity at the Belsen Trial
Belsen Trial
The Belsen Trial was one of several trials that the Allied occupation forces conducted against former officials and functionaries of Nazi Germany after the end of World War II...
and sentenced to death. Executed at of age, Grese was the youngest woman to die judicially under English law in the 20th century.

Irma Grese was born to Alfred Grese, a dairy worker and a member of the Nazi Party from 1937, and Berta Grese. Irma Grese had four siblings. In 1936, her mother committed suicide
Suicide
Suicide is the act of intentionally causing one's own death. Suicide is often committed out of despair or attributed to some underlying mental disorder, such as depression, bipolar disorder, schizophrenia, alcoholism, or drug abuse...
.

Grese left school in 1938 at the age of fifteen, owing to a combination of a poor scholastic aptitude, bullying by classmates, and a fanatical
Fanaticism
Fanaticism is a belief or behavior involving uncritical zeal, particularly for an extreme religious or political cause or in some cases sports, or with an obsessive enthusiasm for a pastime or hobby...
preoccupation with the League of German Girls
League of German Girls
The League of German Girls or League of German Maidens , was the girl's wing of the overall Nazi party youth movement, the Hitler Youth. It was the only female youth organization in Nazi Germany....
(Bund Deutscher Mädel), a Nazi female youth organization, of which her father disapproved. Among other casual jobs, she worked as an assistant nurse in the sanatorium
Sanatorium
A sanatorium is a medical facility for long-term illness, most typically associated with treatment of tuberculosis before antibiotics...
of the SS for two years and unsuccessfully tried to find an apprenticeship as a nurse, after which she worked as a dairy helper.

Quoted below is Irma Grese's testimony, under direct examination, about her background:

I was born on 7 October 1923. In 1938 I left the elementary school and worked for six months on agricultural jobs at a farm, after which I worked in a shop in Luchen for six months. When I was 15 I went to a hospital in Hohenluchen, where I stayed for two years. I tried to become a nurse but the Labour Exchange would not allow that and sent me to work in a dairy in Fürstenburg. In July, 1942, I tried again to become a nurse, but the Labour Exchange sent me to Ravensbrück Concentration Camp, although I protested against it. I stayed there until March, 1943, when I went to Birkenau Camp in Auschwitz. I remained in Auschwitz until January, 1945.

Having completed her training in March 1943, Grese was transferred as a female guard
Female guards in Nazi concentration camps
Of the 55,000 guards who served in Nazi concentration camps, about 3,700 were women. In 1942, the first female guards arrived at Auschwitz and Majdanek from Ravensbrück...
to Auschwitz and by the end of that year was Senior Supervisor, the second highest ranking woman at the camp, in charge of around 30,000 Jewish female prisoners.

In January 1945, Grese briefly returned to Ravensbrück before ending her wartime career at Bergen-Belsen
Bergen-Belsen concentration camp
Bergen-Belsen was a Nazi concentration camp in Lower Saxony in northwestern Germany, southwest of the town of Bergen near Celle...
as a Work Service Manager from March to April, being captured by the British on 17 April 1945, together with other SS personnel who did not flee.

Grese was among the 44 people accused of war crimes at the Belsen Trial
Belsen Trial
The Belsen Trial was one of several trials that the Allied occupation forces conducted against former officials and functionaries of Nazi Germany after the end of World War II...
. She was tried over the first period of the trials (September 17 to November 17, 1945) and was represented by Major L. Cranfield.

The trials were conducted under British military law
Military law
Military justice is the body of laws and procedures governing members of the armed forces. Many states have separate and distinct bodies of law that govern the conduct of members of their armed forces. Some states use special judicial and other arrangements to enforce those laws, while others use...
in Lüneburg
Lüneburg
Lüneburg is a town in the German state of Lower Saxony. It is located about southeast of fellow Hanseatic city Hamburg. It is part of the Hamburg Metropolitan Region, and one of Hamburg's inner suburbs...
, and the charges derived from the Geneva Convention of 1929 regarding the treatment of prisoners. The accusations against her centred on her ill-treatment and murder of those imprisoned at the camps, including setting dogs on inmates, shootings and sadistic beatings with a whip. Survivors provided detailed testimony of murders, tortures, and other cruelties, especially towards women, in which Grese engaged during her years at Auschwitz and Bergen-Belsen. They testified to acts of sadism, beatings and arbitrary shootings of prisoners, savaging of prisoners by her trained and allegedly half-starved dogs, and to her selecting prisoners for the gas chambers. After a fifty-three day trial, Grese was sentenced to hang. Grese was reported to have habitually worn heavy boots and carried a whip and a pistol. Witnesses testified that she used both physical and emotional methods to torture the camp's inmates and enjoyed shooting prisoners in cold blood. They also claimed that she beat some women to death and whipped others using a plaited whip.

Grese and ten others (eight men and two other women; Juana Bormann
Juana Bormann
Juana Bormann was a prison guard at several Nazi concentration camps, and was executed as a war criminal at Hamelin after a trial in 1945...
and Elisabeth Volkenrath
Elisabeth Volkenrath
Elisabeth Volkenrath was German supervisor at several Nazi concentration camps during World War II....
) were convicted for crimes against humanity in both Auschwitz and Belsen and then sentenced to death
Death Sentence
Death Sentence is a short story by the American science-fiction writer Isaac Asimov. It was first published in the November 1943 issue of Astounding Science Fiction and reprinted in the 1972 collection The Early Asimov.-Plot summary:...
. As the verdicts were read, Grese was the only prisoner to remain defiant; her subsequent appeal
Appeal
An appeal is a petition for review of a case that has been decided by a court of law. The petition is made to a higher court for the purpose of overturning the lower court's decision....
was rejected.

On Thursday, 13 December 1945, in Hamelin Jail, Grese was led to the gallows. The women were hanged singly first and then the men in pairs. Regimental Sergeant-Major O'Neil assisted the noted British executioner
Executioner
A judicial executioner is a person who carries out a death sentence ordered by the state or other legal authority, which was known in feudal terminology as high justice.-Scope and job:...
, Albert Pierrepoint
Albert Pierrepoint
Albert Pierrepoint is the most famous member of the family which provided three of the United Kingdom's official hangmen in the first half of the 20th century...
:

... we climbed the stairs to the cells where the condemned were waiting. A German officer at the door leading to the corridor flung open the door and we filed past the row of faces and into the execution chamber. The officers stood at attention. Brigadier Paton-Walsh stood with his wristwatch raised. He gave me the signal, and a sigh of released breath was audible in the chamber, I walked into the corridor. 'Irma Grese', I called.

The German guards quickly closed all grills on twelve of the inspection holes and opened one door. Irma Grese stepped out. The cell was far too small for me to go inside, and I had to pinion her in the corridor. 'Follow me,' I said in English, and O'Neil repeated the order in German. At 9.34 a.m. she walked into the execution chamber, gazed for a moment at the officials standing round it, then walked on to the centre of the trap, where I had made a chalk mark. She stood on this mark very firmly, and as I placed the white cap over her head she said in her languid voice, 'Schnell'. The drop crashed down, and the doctor followed me into the pit and pronounced her dead. After twenty minutes the body was taken down and placed in a coffin ready for burial.

Irma Grese has been portrayed as a minor character in Out of the Ashes
Out of the Ashes
Out of the Ashes is a made-for-television movie that was released by Showtime. It is a dramatization of the life of Holocaust concentration camp survivor Gisella Perl and is based on her book I Was a Doctor in Auschwitz.- Cast :...
as well as The Last Hangman, which details her execution following the Belsen war crimes trial. Both films feature additional female guards in much smaller roles. Grese is also briefly portrayed in a non-speaking re-enactment in Auschwitz: The Nazis and the 'Final Solution'.