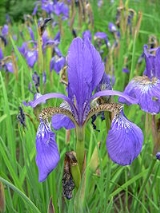 Overview
Iris is a genus
Genus
In biology, a genus is a low-level taxonomic rank used in the biological classification of living and fossil organisms, which is an example of definition by genus and differentia...
of 260

species
Species
In biology, a species is one of the basic units of biological classification and a taxonomic rank. A species is often defined as a group of organisms capable of interbreeding and producing fertile offspring. While in many cases this definition is adequate, more precise or differing measures are...
of flowering plant
Flowering plant
The flowering plants , also known as Angiospermae or Magnoliophyta, are the most diverse group of land plants. Angiosperms are seed-producing plants like the gymnosperms and can be distinguished from the gymnosperms by a series of synapomorphies...
s with showy flower
Flower
A flower, sometimes known as a bloom or blossom, is the reproductive structure found in flowering plants . The biological function of a flower is to effect reproduction, usually by providing a mechanism for the union of sperm with eggs...
s. It takes its name from the Greek
Greek language
Greek is an independent branch of the Indo-European family of languages. Native to the southern Balkans, it has the longest documented history of any Indo-European language, spanning 34 centuries of written records. Its writing system has been the Greek alphabet for the majority of its history;...
word for a rainbow
Rainbow
A rainbow is an optical and meteorological phenomenon that causes a spectrum of light to appear in the sky when the Sun shines on to droplets of moisture in the Earth's atmosphere. It takes the form of a multicoloured arc...
, referring to the wide variety of flower colors found among the many species. As well as being the scientific name, iris is also very widely used as a common name for all Iris species, though some plants called thus belong to other closely related genera. A common name for some species is 'flags', while the plants of the subgenus
Subgenus
In biology, a subgenus is a taxonomic rank directly below genus.In zoology, a subgeneric name can be used independently or included in a species name, in parentheses, placed between the generic name and the specific epithet: e.g. the Tiger Cowry of the Indo-Pacific, Cypraea tigris Linnaeus, which...
Scorpiris are widely known as 'juno
Juno (plant)
Juno, a term for bulbous iris species from subgenus Scorpiris, an independent genus Juno in some classifications.-External links:*...
s', particularly in horticulture
Horticulture
Horticulture is the industry and science of plant cultivation including the process of preparing soil for the planting of seeds, tubers, or cuttings. Horticulturists work and conduct research in the disciplines of plant propagation and cultivation, crop production, plant breeding and genetic...
.

What is the Indian name of Iris flower
More
x