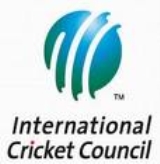 Overview
The International Cricket Council (ICC) is the international governing body
Sport governing body
A sport governing body is a sports organization that has a regulatory or sanctioning function. Sport governing bodies come in various forms, and have a variety of regulatory functions. Examples of this can include disciplinary action for rule infractions and deciding on rule changes in the sport...
of cricket
Cricket
Cricket is a bat-and-ball game played between two teams of 11 players on an oval-shaped field, at the centre of which is a rectangular 22-yard long pitch. One team bats, trying to score as many runs as possible while the other team bowls and fields, trying to dismiss the batsmen and thus limit the...
. It was founded as the Imperial Cricket Conference in 1909 by representatives from England, Australia and South Africa, renamed the International Cricket Conference in 1965, and took up its current name in 1989.

The ICC has 105 members: 10 Full Members that play official Test matches
Test cricket
Test cricket is the longest form of the sport of cricket. Test matches are played between national representative teams with "Test status", as determined by the International Cricket Council , with four innings played between two teams of 11 players over a period of up to a maximum five days...
, 35 Associate Members, and 60 Affiliate Members.

Do the council has a role to play in this never ending feud between WIPA and WICB?

I have been communicated that I have won a prize from The prestigious International Cricket Council's DRAW. And that Mobile Number emerged as one of t...
More