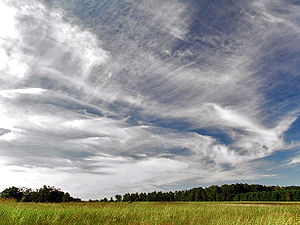 International Cloud Atlas (also Cloud Atlas) is a cloud atlas
Cloud atlas
A cloud atlas is a pictorial key to the nomenclature of clouds. Early cloud atlases were an important element in the training of meteorologists and in weather forecasting, and the author of a 1923 atlas stated that "increasing use of the air as a means of transportation will require and lead to a...
first published in 1896 and remaining in print since then. Its initial purposes included to aid in the training of meteorologists and to promote more consistent use of vocabulary describing cloud
Cloud
A cloud is a visible mass of liquid droplets or frozen crystals made of water and/or various chemicals suspended in the atmosphere above the surface of a planetary body. They are also known as aerosols. Clouds in Earth's atmosphere are studied in the cloud physics branch of meteorology...
s, both important for early weather forecasting
Weather forecasting
Weather forecasting is the application of science and technology to predict the state of the atmosphere for a given location. Human beings have attempted to predict the weather informally for millennia, and formally since the nineteenth century...
. The first edition featured color plates of color photographs, then still a very new technology, yet was noted for being inexpensive. Numerous later editions have been published.

The first edition was inspired in part by the observation of the English meteorologist Ralph Abercromby that clouds were of the same general kinds everywhere in the world. Abercromby and Hildebrandsson developed a new classification of clouds that was published in an earlier atlas, the 1890 Cloud Atlas by Hildebrandsson, Wladimir Köppen
Wladimir Köppen
Wladimir Peter Köppen was a Russian geographer, meteorologist, climatologist and botanist. After studies in St. Petersburg, he spent the bulk of his life and professional career in Germany and Austria...
, and Georg von Neumayer
Georg von Neumayer
Georg Balthazar von Neumayer , was a German polar explorer and scientist who conceived the idea of international cooperation for meteorology and scientific observation....
. Other, similar works published prior to this were M. Weilbach's Nordeuropas Sky-former (Copenhagen, 1881), M. Singer's Wolkentafeln (Munich, 1892), Classificazione delle nubi by the Specola Vaticana (Rome, 1893), and the Rev. W. Clement Ley's Cloudland (London, 1894).

International Cloud Atlas has been published in multiple editions since 1896, including 1911, 1932, 1939, 1956, 1975, and 1995. The 1932 edition was titled International Atlas of Clouds and of States of the Sky . The 1939 edition modified the title to International Atlas of Clouds and Types of Skies. The 1956 edition was the first published in two volumes, separating text and plates. This lowered costs and facilitated the publication of translated editions. It was translated into Polish
Polish language
Polish is a language of the Lechitic subgroup of West Slavic languages, used throughout Poland and by Polish minorities in other countries...
in 1959 (Międzynarodowy atlas chmur; atlas skrócony) and Norwegian
Norwegian language
Norwegian is a North Germanic language spoken primarily in Norway, where it is the official language. Together with Swedish and Danish, Norwegian forms a continuum of more or less mutually intelligible local and regional variants .These Scandinavian languages together with the Faroese language...
in 1958 (Internasjonalt skyatlas 1956). A Dutch
Dutch language
Dutch is a West Germanic language and the native language of the majority of the population of the Netherlands, Belgium, and Suriname, the three member states of the Dutch Language Union. Most speakers live in the European Union, where it is a first language for about 23 million and a second...
translation was published in 1967 (Wolkenatlas. Bewerkt naar de Internationale verkorte wolkenatlas van de Meteorologische Wereldorganisatie).

The 1975 edition was published in two volumes 12 years apart: Volume I (text) in 1975 and Volume II (plates) in 1987. Its innovations included a new chapter describing clouds from above, as from aircraft
Aircraft
An aircraft is a vehicle that is able to fly by gaining support from the air, or, in general, the atmosphere of a planet. An aircraft counters the force of gravity by using either static lift or by using the dynamic lift of an airfoil, or in a few cases the downward thrust from jet engines.Although...
. Also, the former classification of hydrometeors was replaced by a classification of meteor
METEOR
METEOR is a metric for the evaluation of machine translation output. The metric is based on the harmonic mean of unigram precision and recall, with recall weighted higher than precision...
s, in which the hydrometeors are one group:

One reviewer of the 1896 edition noted that The illustrations are beautifully colored, and quite apart from its great value to meteorology, the `Cloud Atlas' is well worth owning for the beauty of the illustrations alone.

The following year, a derivative cloud atlas was published in the United States through the Government Printing Office, titled Illustrative cloud forms for the guidance of observers in the classification of clouds. A reviewer noted "We are not sure that it is desirable that there should be several cloud atlases in existence concurrently; but, probably, administrative difficulties would be raised if in any country copies of the International Cloud Atlas were purchased sufficient in number to supply an entire navy. This, probably, is the reason for the appearance of the present artistic little volume." It copied the International Cloud Atlas, except that it substituted color lithographs.

The International Cloud Atlas was revised numerous times in response to requirements of its principal user community, meteorologists. Nonetheless, it was not sufficient for all users, and consequently a number of other cloud atlases and critiques have been published. A 1901 popular German book about the weather reproduced photographs from the International Cloud Atlas, and one reviewer of the 1901 book judged these reproductions to be its best feature. Atlas photographique des Nuages, a 1912 cloud atlas of grayscale
Grayscale
In photography and computing, a grayscale or greyscale digital image is an image in which the value of each pixel is a single sample, that is, it carries only intensity information...
photographs, was praised for its sharp photographs but criticized for not following the International Cloud Classification. The 1923 book, A Cloud Atlas, despite its title is not a cloud atlas. The author, the American meteorologist Alexander George McAdie
Alexander George McAdie
Alexander George McAdie was an American meteorologist.While in college he joined the Army Signal Service, the predecessor of the U.S. Weather Bureau. He graduated from Harvard University in 1885....
, then director of the Blue Hill Meteorological Observatory
Blue Hill Meteorological Observatory
The Blue Hill Meteorological Observatory, also known as Great Blue Hill Weather Observatory, Blue Hill Weather Observatory, or simply the Blue Hill Observatory, in Milton, Massachusetts is the foremost structure associated with the history of weather observations in the United States...
, advocated a classification of clouds that was not typological but rather predictive: a classification that did not merely describe what was before the observer. As McAdie put it, when we look at a cloud we want to know, not what it resembles, but whether it portends fair or foul weather. The book is a discussion of what characteristics of clouds such a classification might take into account.
The source of this article is wikipedia, the free encyclopedia.  The text of this article is licensed under the GFDL.