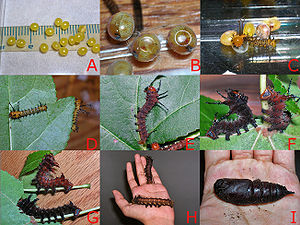 An instar is a developmental stage of arthropods, such as insects, between each molt
Ecdysis
Ecdysis is the moulting of the cuticula in many invertebrates. This process of moulting is the defining feature of the clade Ecdysozoa, comprising the arthropods, nematodes, velvet worms, horsehair worms, rotifers, tardigrades and Cephalorhyncha...
(ecdysis), until sexual maturity is reached. Arthropods must shed the exoskeleton
Exoskeleton
An exoskeleton is the external skeleton that supports and protects an animal's body, in contrast to the internal skeleton of, for example, a human. In popular usage, some of the larger kinds of exoskeletons are known as "shells". Examples of exoskeleton animals include insects such as grasshoppers...
in order to grow or assume a new form. Differences between instars can often be seen in altered body proportions, colors, patterns, or changes in the number of body segments. Some arthropods can continue to molt after sexual maturity, but these subsequent molts are generally not called instars.

For most insect species the term "instar" is used to denote the developmental stage of the larva
Larva
A larva is a distinct juvenile form many animals undergo before metamorphosis into adults. Animals with indirect development such as insects, amphibians, or cnidarians typically have a larval phase of their life cycle...
l or nymph
Nymph (biology)
In biology, a nymph is the immature form of some invertebrates, particularly insects, which undergoes gradual metamorphosis before reaching its adult stage. Unlike a typical larva, a nymph's overall form already resembles that of the adult. In addition, while a nymph moults it never enters a...
al forms of holometabolous (complete metamorphism) or hemimetabolous (incomplete metamorphism) insects, but the term can be used to describe any developmental stage including pupa
Pupa
A pupa is the life stage of some insects undergoing transformation. The pupal stage is found only in holometabolous insects, those that undergo a complete metamorphosis, going through four life stages; embryo, larva, pupa and imago...
or imago
Imago
In biology, the imago is the last stage of development of an insect, after the last ecdysis of an incomplete metamorphosis, or after emergence from the pupa where the metamorphosis is complete...
(the adult, which does not molt in insects).

The number of instars an insect undergoes depends on the species and the environmental conditions. Lower temperatures and humidity often slow the rate of development.
The source of this article is wikipedia, the free encyclopedia.  The text of this article is licensed under the GFDL.