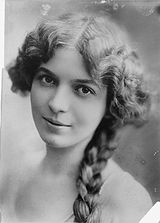 Encyclopedia
Ina Claire was an American stage and film actress. 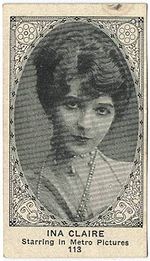 Born Ina Fagan in 1893 in Washington, D.C.
Washington, D.C.
Washington, D.C., formally the District of Columbia and commonly referred to as Washington, "the District", or simply D.C., is the capital of the United States. On July 16, 1790, the United States Congress approved the creation of a permanent national capital as permitted by the U.S. Constitution....
, Claire began her career appearing in vaudeville. She performed on Broadway in the musicals Jumping Jupiter and The Quaker Girl
The Quaker Girl
The Quaker Girl is a Edwardian musical comedy in three acts with a book by James T. Tanner, lyrics by Adrian Ross and Percy Greenbank, and music by Lionel Monckton. In its story, The Quaker Girl contrasts dour Quaker morality with Parisienne high fashion. The protagonist, Prudence, is thrown out...
(both 1911) and Lady Luxury, and starred on Broadway in plays by some of the leading comic dramatists of the 1920s, 1930s, and 1940s, including the roles of Jerry Lamarr in Avery Hopwood
Avery Hopwood
James Avery Hopwood , was the most successful playwright of the Jazz Age, having four plays running simultaneously on Broadway in 1920.-Biography:...
's The Gold Diggers (1919), Mrs. Cheyney in Frederick Lonsdale
Frederick Lonsdale
Frederick Lonsdale was an English dramatist.-Personal life:Lonsdale was born Lionel Frederick Leonard in St Helier, Jersey, the son of Susan and John Henry Leonard, a tobacconist. He began as a private soldier and worked for the London and South Western Railway...
's The Last of Mrs. Cheyney (1925), Lady George Grayston in W. Somerset Maugham
W. Somerset Maugham
William Somerset Maugham , CH was an English playwright, novelist and short story writer. He was among the most popular writers of his era and, reputedly, the highest paid author during the 1930s.-Childhood and education:...
's Our Betters
Our Betters
Our Betters is a 1933 American satirical comedy film directed by George Cukor. The screenplay by Jane Murfin and Harry Wagstaff Gribble is based on the 1923 play of the same title by W. Somerset Maugham.-Plot:...
(1928), and Enid Fuller in George Kelly's The Fatal Weakness.

Her last stage appearance was as Lady Elizabeth Mulhammer in T. S. Eliot
T. S. Eliot
Thomas Stearns "T. S." Eliot OM was a playwright, literary critic, and arguably the most important English-language poet of the 20th century. Although he was born an American he moved to the United Kingdom in 1914 and was naturalised as a British subject in 1927 at age 39.The poem that made his...
's The Confidential Clerk
The Confidential Clerk
thumb|1st edition cover The Confidential Clerk is a comic verse play by T. S. Eliot.-Synopsis:Sir Claude Mulhammer, a wealthy entrepreneur, decides to smuggle his illegitimate son Colby into the household by employing him as his confidential clerk...
(1954). She was particularly identified with the high comedies of S. N. Behrman
S. N. Behrman
Samuel Nathaniel Behrman was an American playwright and screenwriter, who also worked for the New York Times.-Early Years:...
, and created the female leads in three of his plays: Biography
Biography
A biography is a detailed description or account of someone's life. More than a list of basic facts , biography also portrays the subject's experience of those events...
(1934), End of Summer (1936), and The Talley Method (1941). Behrman wrote of Claire's performance in one of Behrman's comedies: "Her readings were translucent, her stage presence encompassing. The flick of an intonation deflated pomposity. She never missed a nuance." Critic J. Brooks Atkinson
Brooks Atkinson
Justin Brooks Atkinson was an American theatre critic. He worked for The New York Times from 1925 to 1960...
praised Claire for her "refulgent comic intelligence. In films, she is best known as the Grand Duchess in the 1939 Metro-Goldwyn-Mayer
Metro-Goldwyn-Mayer
Metro-Goldwyn-Mayer Inc. is an American media company, involved primarily in the production and distribution of films and television programs. MGM was founded in 1924 when the entertainment entrepreneur Marcus Loew gained control of Metro Pictures, Goldwyn Pictures Corporation and Louis B. Mayer...
comedy, political satire Ninotchka
Ninotchka
Ninotchka is a 1939 American film made for Metro Goldwyn Mayer by producer and director Ernst Lubitsch which stars Greta Garbo and Melvyn Douglas. It was written by Billy Wilder, Charles Brackett and Walter Reisch, based on a screen story by Melchior Lengyel. Ninotchka is Greta Garbo's first full...
.