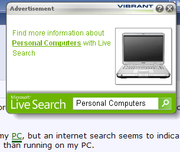 Although contextual advertising in general refers to the inclusion of advertisements adjacent to relevant online context (e.g., Google AdSense
AdSense
Google AdSense which is a program run by Google Inc. allows publishers in the Google Network of content sites to automatically serve text, image, video, and rich media adverts that are targeted to site content and audience. These adverts are administered, sorted, and maintained by Google, and they...
), in-text advertising places hyperlinks directly into the text of the webpage.

In text advertising works on a cost per click (CPC) model, which means that each time a website visitor clicks on an In-text ad, the websites owner gets paid by the advertiser.

The use of this type of advertising in news and journalism websites has been criticized by journalism ethics counselors as "ethically problematic at the least and potentially quite corrosive of journalistic quality and credibility." However, publishers such as the Indianapolis Star who use in-text advertising have reported that despite early objections by some readers, such complaints have "tapered off".
The source of this article is wikipedia, the free encyclopedia.  The text of this article is licensed under the GFDL.