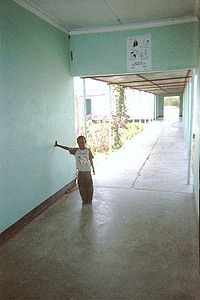 Ijara is a town in the North Eastern Province
North Eastern Province (Kenya)
North Eastern Province is the third largest province in Kenya and has thirteen constituencies represented in the Kenya National Assembly.The region is home to a rare type of antelope called the Hirola, which is classified as an endangered species. The NFD's pastoralists also possess livestock in...
of Kenya
Kenya
Kenya , officially known as the Republic of Kenya, is a country in East Africa that lies on the equator, with the Indian Ocean to its south-east...
. It is capital of the Ijara District
Ijara District
Ijara is an administrative district in the North Eastern Province of Kenya. On May 20, 2000, it was carved out from another and larger Garissa District. It covers an area of 11’332 km² and, according to the population census of 1999, has a population of 62,571...
. Ijara is a very remote town; it is located 100 km north of Lamu
Lamu
-Threats to Lamu:In a 2010 report titled Saving Our Vanishing Heritage, Global Heritage Fund identified Lamu as one of 12 worldwide sites most "On the Verge" of irreparable loss and damage, citing insufficient management and development pressure as primary causes.- See also :* Juma and the Magic...
and 180 km south of Garissa
Garissa
Garissa is a city in the North Eastern Province of Kenya. It is the capital of both the province and Garissa District.-Overview:Garissa is located at and has a population of 65,881 inhabitants . The Tana River flows through the city....
.

Ijara is also a sharia-compliant form of mortgage similar to rent to own. The process is also known as Ijara wa Iqtina, or rent with acquisition. The word Ijara means rent in Arabic.
The source of this article is wikipedia, the free encyclopedia.  The text of this article is licensed under the GFDL.