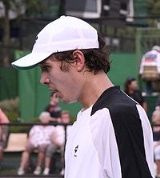 Encyclopedia
Igor Kunitsyn is a professional male tennis player from Russia
Russia
Russia or , officially known as both Russia and the Russian Federation , is a country in northern Eurasia. It is a federal semi-presidential republic, comprising 83 federal subjects...
. He made it into the top 100 for the first time in 2006, and reached a career-high singles ranking of 35 on July 6, 2009.http://www.atpworldtour.com/Tennis/Players/Top-Players/Igor-Kunitsyn.aspx

Kunitsyn was raised by his grandparents in Vladivostok, on the eastern coast of Russia, when he was young, and started to play tennis at age seven.http://www.atpworldtour.com/Tennis/Players/Top-Players/Igor-Kunitsyn.aspx

Kunitsyn is arguably best known for two matches against compatriot Marat Safin
Marat Safin
Marat Mikhailovich Safin is a retired Russian tennis player of Tatar descent. Safin won two grand slams and reached the world number 1 ranking during his career. He was also famous for his emotional outbursts and sometimes fiery temper on court. Safin also holds the record for most broken...
. The first of which was at the 2007 Tennis Channel Open's round robin stage. Kunitsyn had won the first set 6–4, and had an early break in the 2nd before Safin fought back and then got a 5–3 lead. While serving for the match, Kunitsyn broke Safin and then held to get it to 5–5. The set went to a tiebreaker which Safin won. Kunitsyn was still dangerous, as he won the first 3 games of the 3rd set, before losing the next 4. Kunitsyn performed the same as before, and broke Safin again to get the set on equal terms. At 5–5, Kunitsyn suffered a service break and Safin ultimately won the 3rd set 7–5.http://www.taipeitimes.com/News/sport/archives/2007/03/03/2003350869/print The pair met again in the final of the Kremlin Cup
Kremlin Cup
The Kremlin Cup is a professional tennis tournament played on indoor hard courts. It is currently part of the ATP World Tour 250 series of the ATP Tour and is a Premier Tournament on the WTA Tour...
, an ATP tournament played in Moscow, which is to date Kunitsyn's only tour final and was Safin's last appearance in an ATP final before his retirement in 2010. In what was a considerable upset, Kunitsyn defeated the former two-time Grand Slam winner and world no. 1 7–6 (6), 6–7 (4), 6–3 for his first and, to date, only professional title.

In August 2008, he made the semifinals of the Legg Mason Tennis Classic
Legg Mason Tennis Classic
The Legg Mason Tennis Classic is an annual late-summer men's tennis tournament played in Washington, D.C. as part of the ATP Tour. It was first held in 1969. It was later known as the Sovran Bank Classic. . Originally an event of the Grand Prix Tennis Tour and part of the Grand Prix Championship...
, beating Mischa Zverev
Mischa Zverev
Mikhail "Mischa" Zverev is a German professional tennis player. He is the son of former Russian tennis player Alexander Zverev, who is also his coach. He now resides in Monte-Carlo, Monaco and represents Germany internationally...
, Fabio Fognini
Fabio Fognini
Fabio Fognini is a professional tennis player.He is the current Italian No. 1. He achieved his career high rank of No. 32 in the world on 20 June 2011 as a result of his success at the 2011French Open...
, and Somdev Devvarman
Somdev Devvarman
Somdev Devvarman , is a professional Indian tennis player. Three of Devvarman's college conquests, John Isner, Kevin Anderson, and Jesse Levine have successful pro careers. He hit the headlines for being the only collegiate player to have made three consecutive finals at the NCAA, winning...
, before losing to Serbia's Viktor Troicki
Viktor Troicki
Viktor Troicki is a Serbian professional tennis player. He has Serb and Russian ethnic roots. His paternal grandparents emigrated from Tver and Rostov-on-Don to Serbia in 1917. His career-high ranking is no. 12, achieved on 6 June 2011. He won his first ATP singles title at the 2010 Kremlin Cup,...
. In June 2009 he lost to Israeli Dudi Sela
Dudi Sela
David "Dudi" Sela is an Israeli professional tennis player.Sela reached a career-high singles ranking of # 29 in July 2009. He is currently Israel's top men's singles player, ahead of Amir Weintraub.As a 17-year-old junior, he won the 2003 French Open boys' doubles championship with his doubles...
6–4, 6–3, at 's-Hertogenbosch in the Netherlands in a grass-court tuneup for Wimbledon. In Wimbledon, he lost to Andy Roddick
Andy Roddick
Andrew Stephen "Andy" Roddick is an American professional tennis player and a former World No. 1. He is currently the second highest-ranked American player, behind Mardy Fish....
in the second round in four sets, winning the third set.

Heavily favored Russia was hosted by Israel
Israel Davis Cup team
The Israel Davis Cup team represents Israel in Davis Cup tennis competition and is governed by the Israel Tennis Association....
in a Davis Cup quarterfinal tie in July 2009, on indoor hard courts at the Nokia Arena in Tel Aviv
Tel Aviv
Tel Aviv , officially Tel Aviv-Yafo , is the second most populous city in Israel, with a population of 404,400 on a land area of . The city is located on the Israeli Mediterranean coastline in west-central Israel. It is the largest and most populous city in the metropolitan area of Gush Dan, with...
. Russia had won the Davis Cup in both 2002 and 2006, and was the top-ranked country in Davis Cup standings. With Israel having won the first two matches, in what proved to be the deciding third match Israelis Andy Ram
Andy Ram
Andy Ram is a professional tennis player from Israel, and the first Israeli tennis player to win a seniors Grand Slam event . He plays more doubles than singles as he prefers doubles more and wins more matches...
and Jonathan Erlich
Jonathan Erlich
Jonathan Dario "Yoni" Erlich is a professional Israeli tennis player...
beat Kunitsyn and Marat Safin 6–3, 6–4, 6–7 (3), 4–6, 6–4 in front of a boisterous crowd of over 10,000. With the tie clinched for Israel, the reverse singles rubbers were "dead", and instead of best-of-five matches, best-of-three sets were played, with the outcomes of little to no importance. Israel wrapped up a 4–1 victory, as Levy defeated Kunitsyn 6–4, 4–6, 7–6 (2), while Russia won a match as Dudi Sela
Dudi Sela
David "Dudi" Sela is an Israeli professional tennis player.Sela reached a career-high singles ranking of # 29 in July 2009. He is currently Israel's top men's singles player, ahead of Amir Weintraub.As a 17-year-old junior, he won the 2003 French Open boys' doubles championship with his doubles...
retired with an injury.