Encyclopedia
The hypodermis, also called the hypoderm, subcutaneous tissue, or superficial fascia is the lowermost layer of the integumentary system
Integumentary system
The integumentary system is the organ system that protects the body from damage, comprising the skin and its appendages...
in vertebrate
Vertebrate
Vertebrates are animals that are members of the subphylum Vertebrata . Vertebrates are the largest group of chordates, with currently about 58,000 species described. Vertebrates include the jawless fishes, bony fishes, sharks and rays, amphibians, reptiles, mammals, and birds...
s. (Hypoderm and subcutaneous are from Greek and Latin words, respectively, for "beneath the skin.")Types of cells that are found in the hypodermis are fibroblast
Fibroblast
A fibroblast is a type of cell that synthesizes the extracellular matrix and collagen, the structural framework for animal tissues, and plays a critical role in wound healing...
s, adipose cells, and macrophage
Macrophage
Macrophages are cells produced by the differentiation of monocytes in tissues. Human macrophages are about in diameter. Monocytes and macrophages are phagocytes. Macrophages function in both non-specific defense as well as help initiate specific defense mechanisms of vertebrate animals...
s. It is derived from the mesoderm, but unlike the dermis
Dermis
The dermis is a layer of skin between the epidermis and subcutaneous tissues, and is composed of two layers, the papillary and reticular dermis...
, it is not derived from the dermatome region of the mesoderm. In arthropods, the hypodermis is an epidermal layer of cells that secretes the chitin
Chitin
Chitin n is a long-chain polymer of a N-acetylglucosamine, a derivative of glucose, and is found in many places throughout the natural world...
ous cuticle
Cuticle
A cuticle , or cuticula, is a term used for any of a variety of tough but flexible, non-mineral outer coverings of an organism, or parts of an organism, that provide protection. Various types of "cuticles" are non-homologous; differing in their origin, structure, function, and chemical composition...
. The term also refers to a layer of cells lying immediately below the epidermis
Epidermis (botany)
The epidermis is a single-layered group of cells that covers plants' leaves, flowers, roots and stems. It forms a boundary between the plant and the external environment. The epidermis serves several functions, it protects against water loss, regulates gas exchange, secretes metabolic compounds,...
of plants.
This cell is also used to supervise the outer skin from burns and other such articulates.

The hypodermis is used mainly for fat
Fat
Fats consist of a wide group of compounds that are generally soluble in organic solvents and generally insoluble in water. Chemically, fats are triglycerides, triesters of glycerol and any of several fatty acids. Fats may be either solid or liquid at room temperature, depending on their structure...
storage.

A layer of tissue lies immediately below the dermis of vertebrate skin. It is often referred to as subcutaneous tissue though this is a less precise and anatomically inaccurate term. The hypodermis consists primarily of loose connective tissue and lobules of fat. It contains larger blood vessels and nerves than those found in the dermis.


In some animals, such as whales and hibernating mammals, the hypodermis forms an important insulating layer and/or food store.

In some plants, the hypodermis is a layer of cells immediately below the epidermis of leaves. It is often mechanically strengthened, for example, in pine leaves, forming an extra protective layer or a water storage tissue.

According to the eighth edition of Developmental Biology by Scott F. Gilbert, the hypodermis of C. elegans
Caenorhabditis elegans
Caenorhabditis elegans is a free-living, transparent nematode , about 1 mm in length, which lives in temperate soil environments. Research into the molecular and developmental biology of C. elegans was begun in 1974 by Sydney Brenner and it has since been used extensively as a model...
is derived from ectoderm. 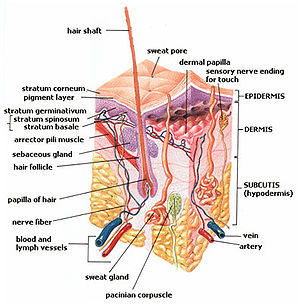 Subcutaneous fat is found just beneath the skin as opposed to visceral fat which is found in the peritoneal cavity
Peritoneal cavity
The peritoneal cavity is a potential space between the parietal peritoneum and visceral peritoneum, that is, the two membranes that separate the organs in the abdominal cavity from the abdominal wall...
. Subcutaneous fat can be measured using body fat caliper
Caliper
A caliper is a device used to measure the distance between two opposing sides of an object. A caliper can be as simple as a compass with inward or outward-facing points...
s giving a rough estimate of total body adiposity. This fat aids in the process of homeostasis
Homeostasis
Homeostasis is the property of a system that regulates its internal environment and tends to maintain a stable, constant condition of properties like temperature or pH...
, by forming a layer of insulation to slow heat loss.

Injection into the subcutaneous tissue is a route of administration
Route of administration
A route of administration in pharmacology and toxicology is the path by which a drug, fluid, poison, or other substance is taken into the body.-Classification:Routes of administration are usually classified by application location...
used for, for example, insulin
Insulin
Insulin is a hormone central to regulating carbohydrate and fat metabolism in the body. Insulin causes cells in the liver, muscle, and fat tissue to take up glucose from the blood, storing it as glycogen in the liver and muscle....
. Skin popping
Skin popping
Skin popping is a method of administration for the use of drugs by injecting or placing the substance or drug under the skin. It can include subcutaneous placement or intradermal placement though is also rarely used to mean intramuscular injection. It is however as a term distinct from the meaning...
is a slang term that includes this method of administration, and is usually used in association with recreational drugs.
The source of this article is wikipedia, the free encyclopedia.  The text of this article is licensed under the GFDL.