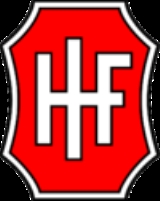 Encyclopedia
Hvidovre IF is a Danish
Denmark
Denmark is a Scandinavian country in Northern Europe. The countries of Denmark and Greenland, as well as the Faroe Islands, constitute the Kingdom of Denmark . It is the southernmost of the Nordic countries, southwest of Sweden and south of Norway, and bordered to the south by Germany. Denmark...
football
Football (soccer)
Association football, more commonly known as football or soccer, is a sport played between two teams of eleven players with a spherical ball...
club, founded on 15 October 1925 in Hvidovre
Hvidovre
Hvidovre Kommune is a municipality in Region Hovedstaden near Copenhagen on the island of Zealand in eastern Denmark. The municipality covers an area of 22 km², and has a total population of 49,380...
.

Peter Schmeichel
Peter Schmeichel
Peter Bolesław Schmeichel MBE is a retired Danish professional footballer who played as a goalkeeper, and was voted the "World's Best Goalkeeper" in 1992 and 1993...
Kenneth Brylle Larsen
Kenneth Brylle Larsen
Kenneth Brylle Larsen is a Danish former professional football player. He scored two goals in 16 matches for the Danish national team and represented his country at the 1984 European Championship.-Biography:...
Michael Proctor
Michael Proctor
Michael Anthony Proctor is a former English footballer. He was born in Sunderland, England.-Sunderland:Proctor made his debut for Sunderland against Everton in the League Cup on 11 November 1998, which finished as a 1–1 draw. He was loaned to Danish side Hvidovre in 2000 to recuperate from a...
Mark Convery
Mark Convery
Mark Peter Convery is an English footballer who plays for Bedlington Terriers as a midfielder.-Career:Born in Newcastle upon Tyne, Tyne and Wear, Convery started his career with Sunderland in 1999 and he joined Hvidovre IF of the Danish First Division on loan for four months in July 2000...
Thomas Kahlenberg
Thomas Kahlenberg
Thomas Kahlenberg is a Danish footballer, who plays as an attacking midfielder for German team Wolfsburg. He started his career with Brøndby IF, winning two Danish Superliga championship, and played four seasons at French club AJ Auxerre...
Thomas Lindrup
Thomas Lindrup
Thomas Lindrup is a former Danish professional football winger.He previously played for Danish Superliga sides FC Nordsjælland, AGF, OB and Brøndby IF.-External links:* * at Danmarks Radio...