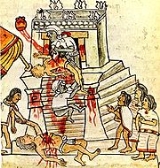 Overview
Human sacrifice
Human sacrifice
Human sacrifice is the act of killing one or more human beings as part of a religious ritual . Its typology closely parallels the various practices of ritual slaughter of animals and of religious sacrifice in general. Human sacrifice has been practised in various cultures throughout history...
was a religious practice characteristic of pre-Columbian Aztec
Aztec
The Aztec people were certain ethnic groups of central Mexico, particularly those groups who spoke the Nahuatl language and who dominated large parts of Mesoamerica in the 14th, 15th and 16th centuries, a period referred to as the late post-classic period in Mesoamerican chronology.Aztec is the...
civilization, as well as of other mesoamerican civilizations such as the Maya
Maya civilization
The Maya is a Mesoamerican civilization, noted for the only known fully developed written language of the pre-Columbian Americas, as well as for its art, architecture, and mathematical and astronomical systems. Initially established during the Pre-Classic period The Maya is a Mesoamerican...
and the Zapotec
Zapotec civilization
The Zapotec civilization was an indigenous pre-Columbian civilization that flourished in the Valley of Oaxaca of southern Mesoamerica. Archaeological evidence shows their culture goes back at least 2500 years...
. The extent of the practice is debated by modern scholars. Some scholars such as Peter Hassler have characterized it as a biased myth of misinterpretation lacking in proof based on scientific method, perpetuated by an agenda among European invaders to dehumanize indigenous people, whom they admitted having a motive to justify their genocidal holocaust against.

Spanish explorers, soldiers and clergy who had contact with the Aztecs between 1517, when an expedition from Cuba
Cuba
The Republic of Cuba is an island nation in the Caribbean. The nation of Cuba consists of the main island of Cuba, the Isla de la Juventud, and several archipelagos. Havana is the largest city in Cuba and the country's capital. Santiago de Cuba is the second largest city...
first explored the Yucatan
Yucatán
Yucatán officially Estado Libre y Soberano de Yucatán is one of the 31 states which, with the Federal District, comprise the 32 Federal Entities of Mexico. It is divided in 106 municipalities and its capital city is Mérida....
, and 1521, when Hernan Cortes
Hernán Cortés
Hernán Cortés de Monroy y Pizarro, 1st Marquis of the Valley of Oaxaca was a Spanish Conquistador who led an expedition that caused the fall of the Aztec Empire and brought large portions of mainland Mexico under the rule of the King of Castile in the early 16th century...
conquered the Aztec capital of Tenochtitlan, made observations of and wrote reports about the practice of human sacrifice.