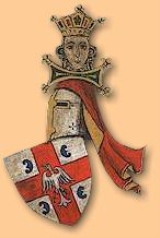 Encyclopedia
The House of Mrnjavčević was a medieval Serbian
Serbs
The Serbs are a South Slavic ethnic group of the Balkans and southern Central Europe. Serbs are located mainly in Serbia, Montenegro and Bosnia and Herzegovina, and form a sizable minority in Croatia, the Republic of Macedonia and Slovenia. Likewise, Serbs are an officially recognized minority in...
noble house
Serbian nobility
Serbian nobility was the privileged order or class of Serbia in the Middle Ages and Early Modern times.The first nobles of greater status was those in the 9th and 10th century, who were connected to the royal family by marriage. In the 13th and 14th centuries, the nobility greatly expanded, and in...
that existed during the Serbian Empire
Serbian Empire
The Serbian Empire was a short-lived medieval empire in the Balkans that emerged from the Serbian Kingdom. Stephen Uroš IV Dušan was crowned Emperor of Serbs and Greeks on 16 April, 1346, a title signifying a successorship to the Eastern Roman Empire...
, its fall
Fall of the Serbian Empire
Following the death of child-less Uroš the Weak, the Serbian Empire was left without an heir and the military commanders obtained the rule of the past provinces and districts , continuing their offices with titles such as gospodin and despot etc., given to them during the Empire...
, and the subsequent years when it held a region of present-day Macedonia region
Macedonia (region)
Macedonia is a geographical and historical region of the Balkan peninsula in southeastern Europe. Its boundaries have changed considerably over time, but nowadays the region is considered to include parts of five Balkan countries: Greece, the Republic of Macedonia, Bulgaria, Albania, Serbia, as...
. The house ruled a province from its base at Prilep
Prilep
Prilep is the fourth largest city in the Republic of Macedonia. It has a population of 66,246 citizens. Prilep is known as "the city under Marko's Towers" because of its proximity to the towers of Prince Marko.-Name:...
(in modern Republic of Macedonia
Republic of Macedonia
Macedonia , officially the Republic of Macedonia , is a country located in the central Balkan peninsula in Southeast Europe. It is one of the successor states of the former Yugoslavia, from which it declared independence in 1991...
) from 1366 to 1395.

Vukašin Mrnjavčević
Vukašin Mrnjavcevic
Vukašin Mrnjavčević was a Serbian ruler in modern-day central and northwestern Macedonia, who ruled from 1365 to 1371. According to 17th-century Ragusan historian Mavro Orbin, his father was a minor noble named Mrnjava from Zachlumia, whose sons Vukašin and Uglješa were born in Livno in western...
was a military commander in the army of Emperor Dušan the Mighty (r. 1331-1355) and co-ruler of Serbia as King, alongside Emperor Uroš the Weak (r. 1355-1371). After Uroš' death, the Serbian Empire crumbled, as the nobility couldn't agree on its rightful successor. Vukašin's son, Marko Kraljević
Prince Marko
Marko Mrnjavčević was de jure the Serbian king from 1371 to 1395, while de facto he ruled only over a territory in western Macedonia centered on the town of Prilep...
, ruled his hereditary lands as titular King of Serbs and Greeks.