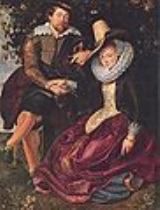 Encyclopedia
The Honeysuckle Bower is a self-portrait
Self-portrait
A self-portrait is a representation of an artist, drawn, painted, photographed, or sculpted by the artist. Although self-portraits have been made by artists since the earliest times, it is not until the Early Renaissance in the mid 15th century that artists can be frequently identified depicting...
of the Flemish Baroque painter Peter Paul Rubens  and his first wife Isabella Brant
Isabella Brant
Isabella Brant was a Flemish artists' model, the first wife of painter Peter Paul Rubens. She was the daughter of Jan Brant, an important city official in Antwerp, and Clara de Moy. Brant married Rubens on 3 October 1609 in Saint Michael's Abbey, Antwerp. They had three children: Clara, Nikolaas...
. They wed on October 3, 1609, in St. Michael's Abbey in Antwerp, shortly after he had returned to the city after eight years in Italy.

The painting is a full-length double portrait of the couple seated in a bower (wikt) of honeysuckle
Honeysuckle
Honeysuckles are arching shrubs or twining vines in the family Caprifoliaceae, native to the Northern Hemisphere. There are about 180 species of honeysuckle, 100 of which occur in China; Europe, India and North America have only about 20 native species each...
. They are surrounded by love and marriage symbolism: the honeysuckle and garden are both traditional symbols of love, and the holding of right hands (junctio dextrarum) represents union through marriage. Additionally, Rubens depicts himself as an aristocratic gentleman with his left hand on the hilt of his sword.
The source of this article is wikipedia, the free encyclopedia.  The text of this article is licensed under the GFDL.