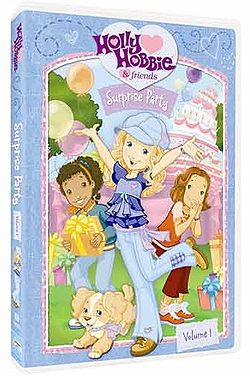 Holly Hobbie is an American writer and illustrator, and the name of a fictional character based on this person.

Holly Hobbie, as a contract artist, worked with the Humorous Planning department at American Greetings under art director Rex Connors, who was responsible for launching "blue girl" as the most identifiable of the Hobby characters. Working in Humorous Planning at that time (1973, 1974) was Bob Childers, a veteran humorous concept artist and designer. Childers insisted that there should be a doll. Since no one seemed to listen, Childers went home and, on his own time, hand-stitched the first prototype and presented it to Connors. Rex Connors then took the doll to Tom Wilson, Creative Vice President, after which American Greetings approached Knickerbocker Toys concerning the Holly Hobby license.

In 1974, Knickerbocker Toys licensed the Holly Hobbie character for a line of rag dolls, which were a popular toy for young American girls for several years. Holly Hobbie products are now once again being marketed by American Greetings in association with Carlton Cards
Carlton Cards
Carlton Cards Limited is a Canadan greeting card company. Their lines of cards include Carlton, Gibson and Tender Thoughts. They also distribute the American Greetings line of cards in Canada. This is not to be confused with Carlton Cards Retail, Inc.....
.

In 1980, Holly was featured in a novel by Richard Dubelman entitled The Adventures of Holly Hobbie. In this book, Holly Hobbie is a ghost who lives in a painting that was painted in 1803. She comes out of the painting to help a descendant, Liz Dutton, find her missing father, an archaeologist who has vanished in Guatemala.

Mattel released a brand new Holly Hobbie doll line during 2006, which includes Holly (blue eyes & blonde hair), Amy (green eyes & red hair), and Carrie (brown eyes & black hair). The dolls feature an all new face sculpt, a new body style, and flat feet. There is also a series of smaller Holly, Amy, and Carrie figures; each of these figures arrives with a farm animal (Holly has a dog named Doodles, Amy has a pig named Chedder, and Carrie has a cat named Bonnett). Separate doll outfits are being sold; each outfit can be customized by the child or the collector. This new doll line is cute and craft-themed. Holly Hobbie (the cartoon) also has three popular songs, two sung in her own voice, "Just Like You" and "The Things That Make You Special", LeAnn Rimes
LeAnn Rimes
LeAnn Rimes is an American country/pop singer. She is known for her rich vocals and her rise to fame as an eight-year-old champion on the original Ed McMahon version of Star Search, followed by the release of the Patsy Cline-intended single "Blue" when Rimes was only age 13, resulting in her...
sang "Twinkle in Her Eye", the theme song.

Toot & Puddle (a creation of the real Holly Hobbie) are best friends, even though Toot likes to travel and Puddle likes to stay at home.

There are several books of their adventures, including:


A "Toot & Puddle" holiday story, I'll be Home for Christmas, was released on DVD by National Geographic.

In the show, Toot & Puddle live in Pocket Hollow, sometimes referred to as Woodcock Pocket. In each episode they learn about a different place or culture. Toot usually goes on a trip to a foreign country, and sometimes Puddle comes along. Every time Toot goes on a trip, Toot & Puddle together say "A boomerang flies, but always returns home where it belongs." On each trip Toot sends a postcard to Puddle. He learns many things on his trips and has many adventures so he shares them with everyone at home.