Encyclopedia
A hoist is a device used for lifting or lowering a load by means of a drum or lift-wheel around which rope or chain wraps. It may be manually operated, electrically or pneumatically driven and may use chain, fiber or wire rope as its lifting medium. The load is attached to the hoist by means of a lifting hook
Lifting hook
A lifting hook is a device for grabbing and lifting loads by means of a device such as a hoist or crane. A lifting hook is usually equipped with a safety latch to prevent the disengagement of the lifting wire rope sling, chain or rope to which the load is attached.A hook may have one or more...
.

The basic hoist has two important characteristics to define it: Lifting medium and power type. The lifting medium is either wire rope, wrapped around a drum, or load-chain, raised by a pulley with a special profile to engage the chain. The power can be provided by different means. Common means are hydraulics, electrical and air driven motors. Both the wire rope hoist and chain hoist have been in common use since the 1800s. however; Mass production
Mass production
Mass production is the production of large amounts of standardized products, including and especially on assembly lines...
of an electric hoist did not start until the early 1900's and was first adapted by Germany. A hoist can be built as one integral-package unit, designed for cost-effective purchasing and moderate use, or it can be built as a built-up custom unit, designed for durability and performance. The built-up hoist will be much more expensive, but will also be easier to repair and more durable. Package units where once regarded as being designed for light to moderate usage, but since the 60's this has changed. Built-up units are designed for heavy to severe service, but over the years that market has decreased in size since the advent of the more durable packaged hoist. A machine shop or fabricating shop will use an integral-package hoist, while a Steel Mill or NASA would use a built-up unit to meet durability, performance, and repairability requirements. NASA has also seen a change in the use of package hoists. The NASA Astronaut training pool for example utilizes cranes with packaged hoists. 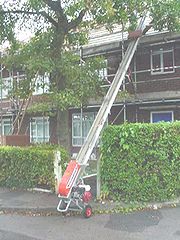 More commonly used hoist in today’s worldwide market is an electrically powered hoist. These are either the chain type or the wire rope type.

Common small portable hoists are of two main types, the chain hoist or chain block and the wire rope or cable type. Chain hoists may have a lever to actuate the hoist or have a loop of operating chain that one pulls through the block (known traditionally as a chain fall) which then activates the block to take up the main lifting chain.

A hand powered hoist with a ratchet wheel is known as a "ratchet lever hoist" or, colloquially, a "Come-A-Long". The original hoist of this type was developed by Abraham Maasdam of Deep Creek, Colorado
Colorado
Colorado is a U.S. state that encompasses much of the Rocky Mountains as well as the northeastern portion of the Colorado Plateau and the western edge of the Great Plains...
about 1919, and later commercialized by his son, Felber Maasdam, about 1946. It has been copied by many manufacturers in recent decades. A similar heavy duty unit with a combination chain and cable became available in 1935 that was used by railroads, but lacked the success of the cable only type units. 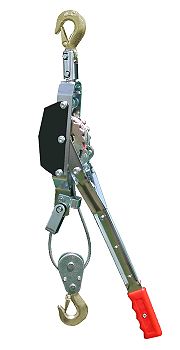 Ratchet lever hoists have the advantage that they can usually be operated in any orientation, for pulling, lifting or binding. Chain block type hoists are usually suitable only for vertical lifting.
For a given rated load wire rope is lighter in weight per unit length but overall length is limited by the drum diameter that the cable must be wound onto. The lift chain of a chain hoist is far larger than the liftwheel over which chain may function. Therefore, a high-performance chain hoist may be of significantly smaller physical size than a wire rope hoist rated at the same working load.

Both systems fail over time through fatigue fractures if operated repeatedly at loads more than a small percentage of their tensile breaking strength. Hoists are often designed with internal clutches to limit operating loads below this threshold. Within such limits wire rope rusts from the inside outward while chain links are markedly reduced in cross section through wear on the inner surfaces. Regular lubrication of both tensile systems is recommended to reduce frequency of replacement. High speed lifting, greater than about 60 ft/min, requires wire rope wound on a drum, because chain over a pocket wheel generates fatigue-inducing resonance for long lifts.

The unloaded wire rope of small hand powered hoists often exhibits a snarled "set", making the use of a chain hoist in this application less frustrating, but heavier. In addition, if the wire in a wire hoist fails, it can whip and cause injury, while a chain will simply break. 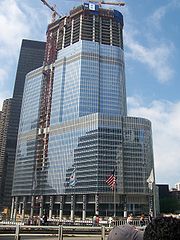 Also known as a Man-Lift, Buckhoist, temporary elevator, builder hoist, passenger hoist or construction elevator, this type of hoist is commonly used on large scale construction projects, such as high-rise buildings or major hospitals. There are many other uses for the construction elevator. Many other industries use the buckhoist for full time operations. The purpose being to carry personnel, materials, and equipment quickly between the ground and higher floors, or between floors in the middle of a structure.

While hoists have been predominantly produced in Europe and the United States, China is emerging as a manufacturer of hoists to be used in Asia.

In the United States and abroad, General Contractors and various other industrial markets rent or lease hoists for a specific projects. Rental or leasing companies provide erection, dismantling, and repair services to their hoists to provide General Contractors with turnkey services. Also the rental and leasing companies can provide parts and service for the elevators that are under contract. 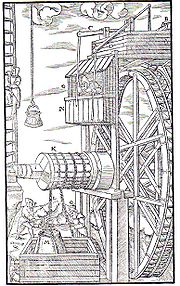 In underground mining a hoist or winder is used to raise and lower conveyances within the mine shaft
Shaft mining
Shaft mining or shaft sinking refers to the method of excavating a vertical or near-vertical tunnel from the top down, where there is initially no access to the bottom....
. Human, animal and water power were used to power the mine hoists documented in Agricola's De Re Metallica
De re metallica
De re metallica is a book cataloguing the state of the art of mining, refining, and smelting metals, published in 1556. The author was Georg Bauer, whose pen name was the Latinized Georgius Agricola...
, published in 1556. Stationary steam engine
Stationary steam engine
Stationary steam engines are fixed steam engines used for pumping or driving mills and factories, and for power generation. They are distinct from locomotive engines used on railways, traction engines for heavy steam haulage on roads, steam cars , agricultural engines used for ploughing or...
s were commonly used to power mine hoists through the 19th century and into the 20th, as at the Quincy Mine
Quincy Mine
The Quincy Mine is an extensive set of copper mines located near Hancock, Michigan. The mine was owned by the Quincy Mining Company and operated between 1846 and 1945, although some activities continued through the 1970s. The Quincy Mine was known as "Old Reliable," as the Quincy Mine Company paid...
, where a 4-cylinder cross-compound corliss engine was used. Modern hoists are powered using electric motors, historically with direct current
Direct current
Direct current is the unidirectional flow of electric charge. Direct current is produced by such sources as batteries, thermocouples, solar cells, and commutator-type electric machines of the dynamo type. Direct current may flow in a conductor such as a wire, but can also flow through...
drives utilizing solid-state converters (thyristors), however modern large hoists use alternating current
Alternating current
In alternating current the movement of electric charge periodically reverses direction. In direct current , the flow of electric charge is only in one direction....
drives that are variable frequency controlled. There are three principal types of hoists used in mining applications, Drum Hoists, Friction (or Kope) hoists and Blair multi-rope hoists.