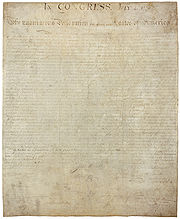 Most famous historical documents are either laws, accounts of battles (often given by the victors or persons sharing their viewpoint), or the exploits of the powerful. Though these documents are of historical interest, they do not detail the daily lives of ordinary people, or the way society functioned. Anthropologists, historians and archeologists generally are more interested in documents that describe the day-to-day lives of ordinary people, indicating what they ate, their interaction with other members of their households and social groups, and their states of mind. It is this information
Information
Information in its most restricted technical sense is a message or collection of messages that consists of an ordered sequence of symbols, or it is the meaning that can be interpreted from such a message or collection of messages. Information can be recorded or transmitted. It can be recorded as...
that allows them to try to understand and describe the way society was functioning at any particular time in history
History
History is the discovery, collection, organization, and presentation of information about past events. History can also mean the period of time after writing was invented. Scholars who write about history are called historians...
.

Many documents that are produced today, such as personal letters, pictures, contracts, newspapers, and medical records, would be considered valuable historical documents in the future
Future
The future is the indefinite time period after the present. Its arrival is considered inevitable due to the existence of time and the laws of physics. Due to the nature of the reality and the unavoidability of the future, everything that currently exists and will exist is temporary and will come...
to such people. However most of these will be lost in the future since they are either printed on ordinary paper which has a limited lifespan, or stored in digital
Digital
A digital system is a data technology that uses discrete values. By contrast, non-digital systems use a continuous range of values to represent information...
formats that will become obsolete fairly soon.

Some companies and government entities are attempting to increase the number of documents that will survive the passage of time, by taking into account the preservation issues, and either printing documents in a manner that would increase the likelihood of them surviving indefinitely, or placing selected documents in time capsule
Time capsule
A time capsule is an historic cache of goods or information, usually intended as a method of communication with future people and to help future archaeologists, anthropologists, or historians...
s or other special storage environments.