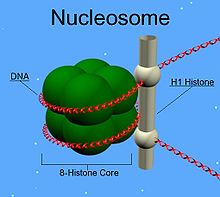 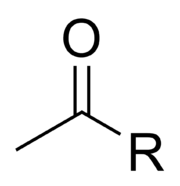 In histone acetylation and deacetylation, the histones are acetylated and deacetylated on lysine
Lysine
Lysine is an α-amino acid with the chemical formula HO2CCH4NH2. It is an essential amino acid, which means that the human body cannot synthesize it. Its codons are AAA and AAG....
residues in the N-terminal tail and on the surface of the nucleosome
Nucleosome
Nucleosomes are the basic unit of DNA packaging in eukaryotes, consisting of a segment of DNA wound around a histone protein core. This structure is often compared to thread wrapped around a spool....
core as part of gene regulation. These reactions are typically catalyzed by enzyme
Enzyme
Enzymes are proteins that catalyze chemical reactions. In enzymatic reactions, the molecules at the beginning of the process, called substrates, are converted into different molecules, called products. Almost all chemical reactions in a biological cell need enzymes in order to occur at rates...
s with "histone acetyltransferase
Histone acetyltransferase
Histone acetyltransferases are enzymes that acetylate conserved lysine amino acids on histone proteins by transferring an acetyl group from acetyl CoA to form ε-N-acetyl lysine....
" (HAT) or "histone deacetylase
Histone deacetylase
Histone deacetylases are a class of enzymes that remove acetyl groups from an ε-N-acetyl lysine amino acid on a histone. This is important because DNA is wrapped around histones, and DNA expression is regulated by acetylation and de-acetylation. Its action is opposite to that of histone...
" (HDAC) activity. The source of the acetyl group in histone acetylation is Acetyl-Coenzyme A, and in histone deacetylation the acetyl group is transferred to Coenzyme A.

Acetylated histones and nucleosomes represent a type of epigenetic tag within chromatin
Chromatin
Chromatin is the combination of DNA and proteins that make up the contents of the nucleus of a cell. The primary functions of chromatin are; to package DNA into a smaller volume to fit in the cell, to strengthen the DNA to allow mitosis and meiosis and prevent DNA damage, and to control gene...
. Acetylation brings in a negative charge, acting to neutralize the positive charge on the histones, thereby decreasing the interaction of the N termini of histones with the negatively charged phosphate groups of DNA
DNA
Deoxyribonucleic acid is a nucleic acid that contains the genetic instructions used in the development and functioning of all known living organisms . The DNA segments that carry this genetic information are called genes, but other DNA sequences have structural purposes, or are involved in...
. As a consequence, the condensed chromatin is transformed into a more relaxed structure that is associated with greater levels of gene transcription. This relaxation can be reversed by HDAC activity. Relaxed, transcriptionally active DNA is referred to as euchromatin
Euchromatin
Euchromatin is a lightly packed form of chromatin that is rich in gene concentration, and is often under active transcription. Unlike heterochromatin, it is found in both cells with nuclei and cells without nuclei...
. More condensed (tightly packed) DNA is referred to as heterochromatin
Heterochromatin
Heterochromatin is a tightly packed form of DNA, which comes in different varieties. These varieties lie on a continuum between the two extremes of constitutive and facultative heterochromatin...
. Condensation can be brought about by processes including deacetylation and methylation; the action of methylation is indirect and has no effect upon charge.

This charge neutralization model has been challenged by recent studies, according to which transcriptionally active genes are correlated with rapid turnover of histone acetylation. This requires that the HATs and HDACs must act continuously on the affected histone tail. Methylation at a specific lysine residue (K4) is involved in targeting histone tails for continuous acetylation and deacetylation.