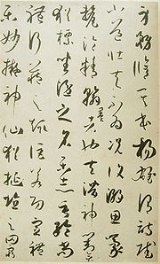 Overview
is a Japanese
Japanese language
is a language spoken by over 130 million people in Japan and in Japanese emigrant communities. It is a member of the Japonic language family, which has a number of proposed relationships with other languages, none of which has gained wide acceptance among historical linguists .Japanese is an...
syllabary
Syllabary
A syllabary is a set of written symbols that represent syllables, which make up words. In a syllabary, there is no systematic similarity between the symbols which represent syllables with the same consonant or vowel...
, one basic component of the Japanese writing system
Japanese writing system
The modern Japanese writing system uses three main scripts:*Kanji, adopted Chinese characters*Kana, a pair of syllabaries , consisting of:...
, along with katakana
Katakana
is a Japanese syllabary, one component of the Japanese writing system along with hiragana, kanji, and in some cases the Latin alphabet . The word katakana means "fragmentary kana", as the katakana scripts are derived from components of more complex kanji. Each kana represents one mora...
, kanji
Kanji
Kanji are the adopted logographic Chinese characters hanzi that are used in the modern Japanese writing system along with hiragana , katakana , Indo Arabic numerals, and the occasional use of the Latin alphabet...
, and the Latin alphabet
Latin alphabet
The Latin alphabet, also called the Roman alphabet, is the most recognized alphabet used in the world today. It evolved from a western variety of the Greek alphabet called the Cumaean alphabet, which was adopted and modified by the Etruscans who ruled early Rome...
(rōmaji). Hiragana and katakana are both kana
Kana
Kana are the syllabic Japanese scripts, as opposed to the logographic Chinese characters known in Japan as kanji and the Roman alphabet known as rōmaji...
systems, in which each character represents one mora
Mora (linguistics)
Mora is a unit in phonology that determines syllable weight, which in some languages determines stress or timing. As with many technical linguistic terms, the definition of a mora varies. Perhaps the most succinct working definition was provided by the American linguist James D...
. Each kana is either a vowel such as "a" (あ); a consonant followed by a vowel such as "ka" (か); or "n" (ん), a nasal
Nasal consonant
A nasal consonant is a type of consonant produced with a lowered velum in the mouth, allowing air to escape freely through the nose. Examples of nasal consonants in English are and , in words such as nose and mouth.- Definition :...
sonorant
Sonorant
In phonetics and phonology, a sonorant is a speech sound that is produced without turbulent airflow in the vocal tract; fricatives and plosives are not sonorants. Vowels are sonorants, as are consonants like and . Other consonants, like or , restrict the airflow enough to cause turbulence, and...
which, depending on the context, sounds either like English m, n, or ng (ŋ), or like the nasal vowel
Nasal vowel
A nasal vowel is a vowel that is produced with a lowering of the velum so that air escapes both through nose as well as the mouth. By contrast, oral vowels are ordinary vowels without this nasalisation...
s of French
French language
French is a Romance language spoken as a first language in France, the Romandy region in Switzerland, Wallonia and Brussels in Belgium, Monaco, the regions of Quebec and Acadia in Canada, and by various communities elsewhere. Second-language speakers of French are distributed throughout many parts...
.

Hiragana is used to write native words for which there are no kanji
Kanji
Kanji are the adopted logographic Chinese characters hanzi that are used in the modern Japanese writing system along with hiragana , katakana , Indo Arabic numerals, and the occasional use of the Latin alphabet...
, including particles
Japanese particles
Japanese particles, or , are suffixes or short words in Japanese grammar that immediately follow the modified noun, verb, adjective, or sentence. Their grammatical range can indicate various meanings and functions, such as speaker affect and assertiveness....
such as から kara "from", and suffixes such as さん ~san "Mr., Mrs., Miss, Ms." Likewise, hiragana is used in words for which the kanji form is obscure, not known to the writer or readers, or too formal for the writing purpose.

When was hiragana developed
More
x