Encyclopedia
The X-18 was an experimental cargo transport aircraft designed to be the first testbed for tiltwing and VSTOL (vertical/short takeoff and landing) technology.

Design work started in 1955
1955 in aviation
This is a list of aviation-related events from 1955:- Events :* The United Kingdoms first atomic bomber unit, the Royal Air Forces No. 138 Squadron, becomes operational, flying Vickers Valiants.-January:...
by Stanley Hiller Jr and Hiller Aircraft Corporation received a manufacturing contract and funding from the U.S. Air Force
United States Air Force
The United States Air Force is the aerial warfare service branch of the United States Armed Forces and one of the American uniformed services. Initially part of the United States Army, the USAF was formed as a separate branch of the military on September 18, 1947 under the National Security Act of...
to build the only X-18 ever produced.

The first test flight was on November 24, 1959, ultimately recording 20 flights out of Edwards AFB
Edwards Air Force Base
Edwards Air Force Base is a United States Air Force base located on the border of Kern County, Los Angeles County, and San Bernardino County, California, in the Antelope Valley. It is southwest of the central business district of North Edwards, California and due east of Rosamond.It is named in...
. A number of problems plagued the X-18 including being susceptible to wind gusts when the wing rotated, acting like a sail. In addition the turboprop engines were not cross-linked, so the failure of one engine meant the airplane would crash. Thrust control was through throttle changes, which were too slow for acceptable height and roll control.

On the 20th and final flight in July 1961
1961 in aviation
This is a list of aviation-related events from 1961:-January:* January 3 – Aero Flight 311, a Douglas DC-3C, crashes near Kvevlax, Finland, killing all 25 people on board. An investigation finds that the captain and first officer both were exhausted for lack of sleep and drunk at the time of...
, the X-18 had a propeller pitch control problem when attempting to convert to a hover at 10,000 ft and went into a spin. The crew regained control and landed, but the X-18 never flew again. However ground testing of the tiltwing concepts continued. Eventually a VTOL Test Stand was built on which the X-18's vertical takeoff and landing and hover control was to be tested. One engine run was successfully conducted to the full 15-foot wheel height on the VTOL Test Stand. The program was cancelled on January 18, 1964 before further VTOL Test Stand testing could be conducted, and the X-18 was cut up for scrap.

This knowledge was employed in the successful development and flight tests of the Tri-Service XC-142A, tilt-wing VSTOL transport. 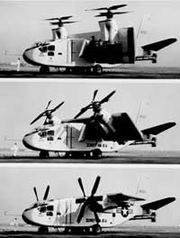