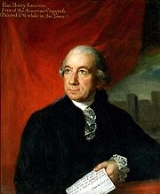 Laurens had earned part of his wealth by operating the largest slave-trading house in North America. In the 1750s alone, his Charleston firm oversaw the sale of more than 8,000 enslaved Africans.

Did he take president after john hancock?
More

Laurens had earned part of his wealth by operating the largest slave-trading house in North America. In the 1750s alone, his Charleston firm oversaw the sale of more than 8,000 enslaved Africans. He was for a time Vice-President of South Carolina and a diplomat to the Netherlands during the Revolutionary War. He was captured at sea and imprisoned for some time by the British in the Tower of London.

He married Eleanor Ball, also of a South Carolina rice planter
Planter
Planter may refer to:*A flower pot or box for plants**Jardinière, one such type of pot*A person or object engaged in sowing seeds**Planter , implement towed behind a tractor, used for sowing crops through a field*A coloniser...
family. They had several children, and she died young in 1770. Laurens took their three sons to England for their education, encouraging their oldest, John Laurens
John Laurens
John Laurens was an American soldier and statesman from South Carolina during the Revolutionary War. He gained approval by the Continental Congress in 1779 to recruit a regiment of 3000 slaves by promising them freedom in return for fighting...
, to study law. The young Laurens returned to the United States in 1776, at the time of the Revolutionary War. 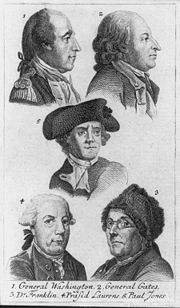 Laurens served in the militia, as did most able-bodied men in his time. He rose to the rank of Lt. Colonel in the campaigns
Anglo-Cherokee War
The Anglo-Cherokee War , also known as the Cherokee War, the Cherokee Uprising, the Cherokee Rebellion, was a conflict between British forces in North America and Cherokee Indians during the French and Indian War...
against the Cherokee
Cherokee
The Cherokee are a Native American people historically settled in the Southeastern United States . Linguistically, they are part of the Iroquoian language family...
Indians
Native Americans in the United States
Native Americans in the United States are the indigenous peoples in North America within the boundaries of the present-day continental United States, parts of Alaska, and the island state of Hawaii. They are composed of numerous, distinct tribes, states, and ethnic groups, many of which survive as...
in 1757-1761.

1757 also marked the first year he was elected to the colonial assembly. Laurens was elected again every year but one until the Revolution replaced the assembly with a state Convention as an interim government. The year he missed was 1773 when he visited England to arrange for his sons' educations. He was named to the colony's Council in 1764 and 1768, but declined both times. In 1772 he joined the American Philosophical Society
American Philosophical Society
The American Philosophical Society, founded in 1743, and located in Philadelphia, Pa., is an eminent scholarly organization of international reputation, that promotes useful knowledge in the sciences and humanities through excellence in scholarly research, professional meetings, publications,...
of Philadelphia
Philadelphia, Pennsylvania
Philadelphia is the largest city in the Commonwealth of Pennsylvania and the county seat of Philadelphia County, with which it is coterminous. The city is located in the Northeastern United States along the Delaware and Schuylkill rivers. It is the fifth-most-populous city in the United States,...
, and carried on extensive correspondence with other members.

As the American Revolution
American Revolution
The American Revolution was the political upheaval during the last half of the 18th century in which thirteen colonies in North America joined together to break free from the British Empire, combining to become the United States of America...
neared, Laurens was at first inclined to support reconciliation with the British Crown
United Kingdom
The United Kingdom of Great Britain and Northern IrelandIn the United Kingdom and Dependencies, other languages have been officially recognised as legitimate autochthonous languages under the European Charter for Regional or Minority Languages...
. But as conditions deteriorated, he came to fully support the American position. When Carolina began to create a revolutionary government, Laurens was elected to the Provincial Congress which first met on January 9, 1775. He was president of the Committee of Safety
Committee of Safety (American Revolution)
Many Committees of Safety were established throughout Colonial America at the start of the American Revolution. These committees started to appear in the 1760s as means to discuss the concerns of the time, and often consisted of every male adult in the community...
, and presiding officer of that congress from June until March of 1776. When South Carolina installed a fully independent government, he served as the Vice President of South Carolina from March of 1776 to June 27, 1777.

In the fall of 1779 the Congress named Laurens their minister to the Netherlands
Netherlands
The Netherlands is a constituent country of the Kingdom of the Netherlands, located mainly in North-West Europe and with several islands in the Caribbean. Mainland Netherlands borders the North Sea to the north and west, Belgium to the south, and Germany to the east, and shares maritime borders...
. In early 1780 he took up that post and successfully negotiated Dutch support for the war. But on his return voyage to Amsterdam that fall, the British Navy intercepted his ship, the continental packet Mercury, off the banks of Newfoundland. Although his dispatches were tossed in the water, they were retrieved by the British, who discovered the draft of a possible U.S.-Dutch treaty prepared by William Lee
William Lee
-Miscellaneous:*William Lee , Roman Catholic bishop*William Lee , Roman Catholic bishop*William Lee , colonial writer and ship's captain...
. This prompted Britain to declare war on the Netherlands, it becoming known as the Fourth Anglo-Dutch War
Fourth Anglo-Dutch War
The Fourth Anglo–Dutch War was a conflict between the Kingdom of Great Britain and the Dutch Republic. The war, tangentially related to the American Revolutionary War, broke out over British and Dutch disagreements on the legality and conduct of Dutch trade with Britain's enemies in that...
.

Laurens was charged with treason, transported to England, and imprisoned in the Tower of London
Tower of London
Her Majesty's Royal Palace and Fortress, more commonly known as the Tower of London, is a historic castle on the north bank of the River Thames in central London, England. It lies within the London Borough of Tower Hamlets, separated from the eastern edge of the City of London by the open space...
(the only American to be held prisoner in the Tower). His imprisonment was protested by the Americans. In the field, most captives were regarded as prisoners of war, and while conditions were frequently appalling, prisoner exchanges and mail privileges were accepted practice. During his imprisonment, Laurens was assisted by Richard Oswald, his former business partner and the principal owner of Bunce Island
Bunce Island
Bunce Island is the site of an 18th century British slave castle in the Republic of Sierra Leone in West Africa....
. Oswald argued on Laurens' behalf to the British government. Finally, on December 31, 1781 he was released in exchange for General Lord Cornwallis
Charles Cornwallis, 1st Marquess Cornwallis
Charles Cornwallis, 1st Marquess Cornwallis KG , styled Viscount Brome between 1753 and 1762 and known as The Earl Cornwallis between 1762 and 1792, was a British Army officer and colonial administrator...
and completed his voyage to Amsterdam. He helped raise funds for the American effort.

In a late skirmish during the war, Laurens' oldest son John was killed in 1782. He had supported enlisting and freeing slaves for the war effort and intended to free his own. After the war, Henry Laurens manumitted their slaves.

In 1783 Laurens was sent to Paris
Paris
Paris is the capital and largest city in France, situated on the river Seine, in northern France, at the heart of the Île-de-France region...
as one of the Peace Commissioners for the negotiations leading to the Treaty of Paris
Treaty of Paris (1783)
The Treaty of Paris, signed on September 3, 1783, ended the American Revolutionary War between Great Britain on the one hand and the United States of America and its allies on the other. The other combatant nations, France, Spain and the Dutch Republic had separate agreements; for details of...
. While he was not a signatory of the primary treaty, he was instrumental in reaching the secondary accords that resolved issues related to the Netherlands and Spain
Spain
Spain , officially the Kingdom of Spain languages]] under the European Charter for Regional or Minority Languages. In each of these, Spain's official name is as follows:;;;;;;), is a country and member state of the European Union located in southwestern Europe on the Iberian Peninsula...
. Richard Oswald, a former partner of Laurens in the slave trade, was the principal negotiator for the British during the Paris peace talks.

The British occupying forces from Charleston had burned the main home at Mepkin
Mepkin Abbey
Mepkin Abbey is a Trappist monastery in Berkeley County, South Carolina. The abbey is located near Moncks Corner, at the junction of the two forks of the Cooper River northwest of Charleston....
during the war. When Laurens and his family returned in 1784, they lived in an outbuilding while the great house
Great house
A great house is a large and stately residence; the term encompasses different styles of dwelling in different countries. The name refers to the makeup of the household rather than to any particular architectural style...
was rebuilt. He lived there the rest of his life, working to recover the estimated £40,000 that the revolution had cost him (equivalent to about $3,500,000 in 2000 values).

After Laurens died December 8, 1792 at his estate, Mepkin, and stated in his will he wished to be cremated, and his ashes be interred at his estate. It's reported that he was the first formal cremation in US. Afterward, the estate passed through several hands. Large portions of the estate still exist, and are used today as a Trappist
TRAPPIST
TRAPPIST is Belgian robotic telescope in Chile which came online in 2010, and is an acronym for TRAnsiting Planets and PlanetesImals Small Telescope, so named in homage to Trappist beer produced in the Belgian region. Situated high in the Chilean mountains at La Silla Observatory, it is actually...
abbey.