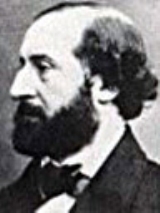 Encyclopedia
Pierre François Henri Labrouste (pjɛʁ fʁɑ̃swa ɑ̃ʁi labrust) (11 May 1801–24 June 1875) was a French
France
The French Republic , The French Republic , The French Republic , (commonly known as France , is a unitary semi-presidential republic in Western Europe with several overseas territories and islands located on other continents and in the Indian, Pacific, and Atlantic oceans. Metropolitan France...
architect
Architect
An architect is a person trained in the planning, design and oversight of the construction of buildings. To practice architecture means to offer or render services in connection with the design and construction of a building, or group of buildings and the space within the site surrounding the...
from the famous École des Beaux Arts school of architecture. After a six year stay in Rome, Labrouste opened an architectural training workshop, which quickly became the center of the Rationalist view. He was noted for his use of iron frame construction, and was one of the first to realize the importance of its use.

Born in Paris
Paris
Paris is the capital and largest city in France, situated on the river Seine, in northern France, at the heart of the Île-de-France region...
, Labrouste entered Collège Sainte-Barbe as a student in 1809. He was then admitted to the second class in the Royal School of Beaux Arts to the Lebas-Vaudoyer workshop in 1819. In 1820, he was promoted to the first class. Competing for the Grand Prix, Labrouste took second place behind the Palais de Justice by Guillaume-Abel Blouet
Guillaume-Abel Blouet
Guillaume-Abel Blouet was a French architect who specialised in prison design.-Biography:Blouet was born at Passy. He won the Grand Prix de Rome in 1821 at the Ecole des Beaux-Arts, entitling him to five years' study at the French Academy in Rome...
in 1821. In 1823 he won the departmental prize, and worked as a lieutenant-inspector (sous-inspecteur) under the direction of Étienne-Hippolyte Godde
Étienne-Hippolyte Godde
Étienne-Hippolyte Godde was a French neoclassic architect.Born in Breteuil, Oise, educated at the École nationale supérieure des Beaux-Arts, and Architect of the City of Paris from 1813 to 1830, Godde designed some thirty religious buildings, six public buildings, and numerous other structures. ...
during the construction of Saint-Pierre-du-Gros-Caillou. 1824 was a turning point in Labrouste's life, as he won the competition with a design of a Supreme Court of Appeals. In November he left Paris for Italy, visiting Turin, Milan, Lodi, Piacenza, Parma, Modena, Bologna, Florence and Arezzo.

Receiving a pension or stipend from the French government for five years, the laureates stayed in the Medici Villa. The Directors of the French Academy at Rome said in correspondence about the laureates that in their studies of Anitiquity they "must research the laws of proportion and reduce them to formulas to be used by masters and students in Paris."
His buildings include:
The source of this article is wikipedia, the free encyclopedia.  The text of this article is licensed under the GFDL.