Henri Deutsch de la Meurthe (1846 - 1919) was a successful French
France
The French Republic , The French Republic , The French Republic , (commonly known as France , is a unitary semi-presidential republic in Western Europe with several overseas territories and islands located on other continents and in the Indian, Pacific, and Atlantic oceans. Metropolitan France...
petroleum
Petroleum
Petroleum or crude oil is a naturally occurring, flammable liquid consisting of a complex mixture of hydrocarbons of various molecular weights and other liquid organic compounds, that are found in geologic formations beneath the Earth's surface. Petroleum is recovered mostly through oil drilling...
businessman (known as the "Oil King of Europe") and an avid supporter of early aviation
Aviation
Aviation is the design, development, production, operation, and use of aircraft, especially heavier-than-air aircraft. Aviation is derived from avis, the Latin word for bird.-History:...
. He sponsored a number of prizes to encourage the development of aviation technologies, including the Grand Prix d'Aviation and the Deutsch de la Meurthe prize.

The Deutsch de la Meurthe was a French family known for its wealth and patronage in technology and philanthropy, having helped develop the industrial oils industry in France. Venu Lorraine Alexander Deutsch founded a company in 1845 for the processing and marketing of vegetable oils in La Villette
La Villette, Calvados
-References:*...
, then independent commune of Paris
Paris
Paris is the capital and largest city in France, situated on the river Seine, in northern France, at the heart of the Île-de-France region...
. With the discovery of petroleum oil in Pennsylvania
Pennsylvania
The Commonwealth of Pennsylvania is a U.S. state that is located in the Northeastern and Mid-Atlantic regions of the United States. The state borders Delaware and Maryland to the south, West Virginia to the southwest, Ohio to the west, New York and Ontario, Canada, to the north, and New Jersey to...
in 1859, Deutsch began to study and develop the use of petroleum oils in France. In 1877, Deutsch brought his two sons, Henri and Emile into the family business, which bought a refinery in Rouen
Rouen
Rouen , in northern France on the River Seine, is the capital of the Haute-Normandie region and the historic capital city of Normandy. Once one of the largest and most prosperous cities of medieval Europe , it was the seat of the Exchequer of Normandy in the Middle Ages...
in 1881 and the refinery in St. Loubès in Gironde
Gironde
For the Revolutionary party, see Girondists.Gironde is a common name for the Gironde estuary, where the mouths of the Garonne and Dordogne rivers merge, and for a department in the Aquitaine region situated in southwest France.-History:...
in 1883. In 1889, in association with the Rothschild
Rothschild family
The Rothschild family , known as The House of Rothschild, or more simply as the Rothschilds, is a Jewish-German family that established European banking and finance houses starting in the late 18th century...
brothers, refining oil began in Spain. At this point, Alexander added "the Meurthe" to the family name. 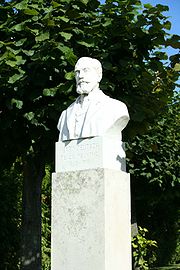 Henri recognized that the future of petroleum sales depended on the development of small internal-combustion engines, and so he promoted automobile
Automobile
An automobile, autocar, motor car or car is a wheeled motor vehicle used for transporting passengers, which also carries its own engine or motor...
development (he presented French President Marie François Sadi Carnot
Marie François Sadi Carnot
Marie François Sadi Carnot was a French statesman and the fourth president of the Third French Republic. He served as the President of France from 1887 until his assassination in 1894.-Early life:...
with an automobile) and developed a passion for aviation. Along with Ernest Archdeacon
Ernest Archdeacon
Ernest Archdeacon , was a prominent French lawyer of Irish descent who was associated with pioneering aviation in France before the First World War. He made his first balloon flight at the age of 20. He commissioned a copy of the 1902 Wright No. 3 glider but had only limited success...
and industrialist Gustave Eiffel
Gustave Eiffel
Alexandre Gustave Eiffel was a French structural engineer from the École Centrale Paris, an architect, an entrepreneur and a specialist of metallic structures...
, he founded the Aéro-Club de France
Aéro-Club de France
The Aéro-Club de France was founded as the Aéro-Club on 20 October 1898 as a society 'to encourage aerial locomotion' by Ernest Archdeacon, Léon Serpollet, Henri de la Valette, Jules Verne and his wife, André Michelin, Albert de Dion, Alberto Santos-Dumont, Henry Deutsch de la Meurthe, and Henry de...
to promote the new technologies. In order to do this, he used some of his wealth to create a number of monetary prizes as incentives for aviators to achieve certain aviation milestones.

He supported the establishment at the initiative of Lazare Weiller, who bought the patents of the Wright brothers
Wright brothers
The Wright brothers, Orville and Wilbur , were two Americans credited with inventing and building the world's first successful airplane and making the first controlled, powered and sustained heavier-than-air human flight, on December 17, 1903...
and organized demonstration flights piloted by Wilbur Wright in Le Mans
Le Mans
Le Mans is a city in France, located on the Sarthe River. Traditionally the capital of the province of Maine, it is now the capital of the Sarthe department and the seat of the Roman Catholic diocese of Le Mans. Le Mans is a part of the Pays de la Loire region.Its inhabitants are called Manceaux...
beginning on August 8, 1908. Deutsch de la Meurthe also invested in aircraft builders Société Astra
Société Astra
Société Astra des Constructions Aéronautiques was a major French manufacturer of balloons, airships, and aeroplanes in the early 20th Century. It was founded in 1908 when Henri Deutsch de la Meurthe purchased Édouard Surcouf's workshops at Billancourt...
(1909) and Nieuport
Nieuport
Nieuport, later Nieuport-Delage, was a French aeroplane company that primarily built racing aircraft before World War I and fighter aircraft during World War I and between the wars.-Beginnings:...
(1911).

At the end of May 1909, Henri Deutsch de la Meurthe offered at the University of Paris
University of Paris
The University of Paris was a university located in Paris, France and one of the earliest to be established in Europe. It was founded in the mid 12th century, and officially recognized as a university probably between 1160 and 1250...
a sum of 500,000 francs and an annual pension of 15,000 francs for the creation and maintenance of the Institute Aérotechnique at Saint-Cyr-l'École
Saint-Cyr-l'École
Saint-Cyr-l'École is a commune in the western suburbs of Paris, France. It is located from the center of Paris.It used to host the training school for officers of the French army, the École Spéciale Militaire de Saint-Cyr , which was relocated to Coëtquidan in 1945.The old buildings of the ESM are...
, which would continue the theoretical research and development of air transport aircraft. It was later integrated into the Conservatoire National des Arts et Métiers
Conservatoire National des Arts et Métiers
The Conservatoire National des Arts et Métiers , or National Conservatory of Arts and Crafts, is a doctoral degree-granting higher education establishment operated by the French government, dedicated to providing education and conducting research for the promotion of science and industry...
.

On May 21, 1911, Deutsch was injured and French Minister of War Maurice Berteaux was killed when a Train monoplane crashed at the beginning of a Paris to Madrid air race.

In April 1900, Henri offered the Deutsch de la Meurthe prize, also simply known as the Deutsch prize, of 100,000 francs to the first machine capable of flying a round trip from the Parc Saint Cloud to the Eiffel Tower
Eiffel Tower
The Eiffel Tower is a puddle iron lattice tower located on the Champ de Mars in Paris. Built in 1889, it has become both a global icon of France and one of the most recognizable structures in the world...
in Paris
Paris
Paris is the capital and largest city in France, situated on the river Seine, in northern France, at the heart of the Île-de-France region...
and back in less than thirty minutes. The winner of the prize needed to maintain an average ground speed of at least 22 km/h (13.7 mph) to cover the round trip distance of 11 kilometres (6.8 mi) in the allotted time. The prize was to be available from May 1, 1900 to October 1, 1903.

To win the prize, Alberto Santos-Dumont
Alberto Santos-Dumont
Alberto Santos-Dumont , was a Brazilian early pioneer of aviation. The heir of a wealthy family of coffee producers, Santos Dumont dedicated himself to science studies in Paris, France, where he spent most of his adult life....
decided to build a balloon bigger than his earlier craft, the dirigible Number 5. On August 8, 1901 during one of his attempts, his dirigible lost hydrogen gas. It started to descend and was unable to clear the roof of the Trocadero Hotel. A large explosion was then heard. Santos-Dumont survived the explosion and was left hanging in a basket from the side of the hotel. With the help of the crowd he climbed to the roof without injury.

On October 19, 1901, after several attempts and trials, Santos-Dumont launched his Number 6
Santos-Dumont number 6
The airship, designated as his #6, was designed and built by Alberto Santos-Dumont. He used it to win the Deutsch prize in 1901. It is considered by many to be the first truly successful airship....
airship at 2:30 pm. After only nine minutes of flight, Santos-Dumont had rounded the Eiffel Tower, but then suffered an engine failure. To restart the engine, he had to climb back over the gondola rail without a safety harness. The attempt was successful, and he crossed the finish line in 29 minutes 30 seconds. Deutsch de La Meurthe immediately congratulated Santos-Dumont, but quickly a controversy broke out around a last minute rule change regarding the precise timing of the flight, and the timekeeper announced that the flight had failed the time limits by 40 seconds.

There was much public outcry from the crowds watching the flight, as well as comment in the press, but initially the prize was not awarded. Finally, after two weeks of vacillating by the committee of officials, Santos-Dumont was awarded the prize as well as the prize money of 100,000 francs. In a charitable gesture, he gave half the prize to his crew and then donated the other half to the poor of Paris.

In 1904, Deutsch de la Meurthe in collaboration with Ernest Archdeacon created the Grand Prix d'Aviation (also known as the "Deutsch-Archdeacon Prize"), a prize of 50,000 francs for the first person to fly a circular 1-kilometer course in a heavier-than-air craft. It was won on January 13 1908 by Henry Farman
Henry Farman
Henri Farman Henri Farman Henri Farman (26 May 1874 – 17 July 1958 was a French pilot, aviator and aircraft designer and manufacturer with his brother Maurice Farman. His family was British and he took French nationality in 1937.-Biography:...
flying a Voisin biplane at Issy-les-Moulineaux
Issy-les-Moulineaux
Issy-les-Moulineaux is a commune in the southwestern suburban area of Paris, France. It is located from the centre of Paris. On 1 January 2003, Issy-les-Moulineaux became part of the Communauté d'agglomération Arc de Seine along with the other communes of Chaville, Meudon, Vanves and Ville-d'Avray...
in a time of 1 minute 28 seconds, then a distance and speed record.
The source of this article is wikipedia, the free encyclopedia.  The text of this article is licensed under the GFDL.