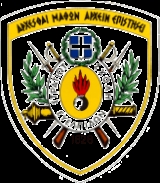 The institution was created to provide officers for all the Arms of the Hellenic Army
Hellenic Army
The Hellenic Army , formed in 1828, is the land force of Greece.The motto of the Hellenic Army is , "Freedom Stems from Valor", from Thucydides's History of the Peloponnesian War...
(Infantry, Armor, Artillery, Signals, Engineering, and Army Aviation), as well as some of the Corps (the Technical Corps, the Transportation & Supply Corps, and the Ordnance Corps). By contrast, officers in the Legal Corps, the Medical Corps, the Finance Corps, and the Auditing Corps are graduates of the Corps Officers Military Academy (Στρατιωτική Σχολή Αξιωματικών Σωμάτων), with the exception of nurse officers in the Medical Corps, who are graduates of the Nurse Officer Academy (Σχολή Αξιωματικών Νοσηλευτών).

The Hellenic Military Academy was founded in 1828 in Nafplio, the first capital of the modern Greek State. In 1834 the Academy was relocated to the Island of Aegina
Aegina
Aegina is one of the Saronic Islands of Greece in the Saronic Gulf, from Athens. Tradition derives the name from Aegina, the mother of Aeacus, who was born in and ruled the island. During ancient times, Aegina was a rival to Athens, the great sea power of the era.-Municipality:The municipality...
and, in 1837, to the city of Piraeus
Piraeus
Piraeus is a city in the region of Attica, Greece. Piraeus is located within the Athens Urban Area, 12 km southwest from its city center , and lies along the east coast of the Saronic Gulf....
.

From 1854 to 1857 it was shortly housed in the mansion of the Duchess of Placentia in central Athens
Athens
Athens , is the capital and largest city of Greece. Athens dominates the Attica region and is one of the world's oldest cities, as its recorded history spans around 3,400 years. Classical Athens was a powerful city-state...
(which currently houses the Byzantine Museum). It was then re-positioned to Kypseli,Athens and in 1994 the Academy was permanently established in Vari, South-East of Athens. The facilities were donated to the Greek State by the national benefactor Georgios Averof.

Throughout its long history, the Hellenic Army Academy has taken part in all national rallies and wars. Its presence surpassed the conventional character of a common Military School. Graduates of the Academy have been not only distinguished Army Officers, but also high level scientists, famous authors and the first civil engineers and professors of Physics
Physics
Physics is a natural science that involves the study of matter and its motion through spacetime, along with related concepts such as energy and force. More broadly, it is the general analysis of nature, conducted in order to understand how the universe behaves.Physics is one of the oldest academic...
and Mathematics
Mathematics
Mathematics is the study of quantity, space, structure, and change. Mathematicians seek out patterns and formulate new conjectures. Mathematicians resolve the truth or falsity of conjectures by mathematical proofs, which are arguments sufficient to convince other mathematicians of their validity...
, until the respective faculties in Greek Universities were founded.

Academic education includes military and academic courses and covers up to 50% of the curriculum. Military training includes day and night field training. Subjects such as individual training and small infantry echelon exercises are held in co-operation with Corps of the Hellenic Army
Hellenic Army
The Hellenic Army , formed in 1828, is the land force of Greece.The motto of the Hellenic Army is , "Freedom Stems from Valor", from Thucydides's History of the Peloponnesian War...
and other branches of the Armed Forces. Applied military tactics is a vital part of the overall training of Cadets covering 38% of the curriculum. Physical Training and Gymnastics cover 12% of the overall training and include track events and various sports.

In order to complete its mission, the Hellenic Army Academy trains and educates Cadets by offering education in various arts and sciences with a view to widen their general knowledge, offer them the required military training so that they are able to attend the Special Training Program of the Hellenic Army
Hellenic Army
The Hellenic Army , formed in 1828, is the land force of Greece.The motto of the Hellenic Army is , "Freedom Stems from Valor", from Thucydides's History of the Peloponnesian War...
upon graduation and cultivate and develop military merits and military attitude so that they acquire, to a high level as new Officers, the qualifications and skills necessary for becoming leaders with integrity of character, knowledge and physical as well as mental endurance.