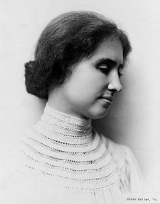 Overview
Helen Adams Keller was an American author, political activist, and lecturer
Lecturer
Lecturer is an academic rank. In the United Kingdom, lecturer is a position at a university or similar institution, often held by academics in their early career stages, who lead research groups and supervise research students, as well as teach...
. She was the first deafblind
Deafblindness
Deafblindness is the condition of little or no useful sight and little or no useful hearing. Educationally, individuals are considered to be deafblind when the combination of their hearing and vision loss causes such severe communication and other developmental and educational needs that they...
person to earn a Bachelor of Arts
Bachelor of Arts
A Bachelor of Arts , from the Latin artium baccalaureus, is a bachelor's degree awarded for an undergraduate course or program in either the liberal arts, the sciences, or both...
degree.
The story of how Keller's teacher, Anne Sullivan, broke through the isolation imposed by a near complete lack of language, allowing the girl to blossom as she learned to communicate, has become widely known through the dramatic depictions of the play and film The Miracle Worker
The Miracle Worker
The Miracle Worker is a cycle of 20th century dramatic works derived from Helen Keller's autobiography The Story of My Life. Each of the various dramas describes the relationship between Keller—a deafblind and initially almost feral child—and Anne Sullivan, the teacher who introduced her to...
.

A prolific author, Keller was well-traveled, and was outspoken in her opposition to war.

Dear Friends, I'm looking for the exact source of the famous Helen quote: "Walking with a friend in the dark is better than walking alone in the...
More

Did Helen Keller have a history of depression or melancholy?
More

The only real blind person at Christmas-time is he who has not Christmas in his heart. We sightless children had the best of eyes that day in our hearts and in our finger-tips. We were glad from the child's necessity of being happy. The blind who have outgrown the child's perpetual joy can be children again on Christmas Day and celebrate in the midst of them who pipe and dance and sing a new song!

"Christmas in the Dark" in Ladies Home Journal (December 1906)

The bulk of the world’s knowledge is an imaginary construction.

We differ, blind and seeing, one from another, not in our senses, but in the use we make of them, in the imagination and courage with which we seek wisdom beyond the senses.

When one door of happiness closes, another opens; but often we look so long at the closed door that we do not see the one which has been opened for us.

Avoiding danger is no safer in the long run than outright exposure. The fearful are caught as often as the bold.

Security is mostly a superstition. It does not exist in nature, nor do the children of men as a whole experience it. Avoiding danger is no safer in the long run than outright exposure. Life is either a daring adventure, or nothing.