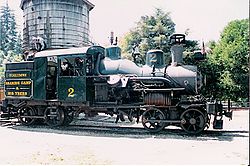 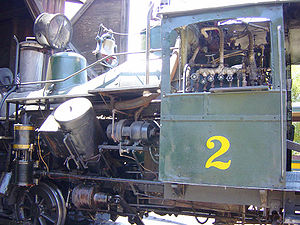 The Heisler locomotive was the last variant of the three major types of geared steam locomotive
Geared steam locomotive
A geared steam locomotive is a type of steam locomotive which uses reduction gearing in the drivetrain, as opposed to the common directly driven design....
, Charles L. Heisler receiving a patent for the design in 1892 following the construction of a prototype in 1891. Somewhat similar to a Climax locomotive
Climax locomotive
A Climax locomotive is a type of geared steam locomotive in which the two steam cylinders were attached to a transmission located under the center of the boiler. This transmits power to driveshafts running to the front and rear trucks....
, Heisler's design featured two cylinders canted inwards at a 45-degree angle to form a 'vee-twin' arrangement. Power then went to a longitudinal drive shaft in the center of the frame that drove the outboard axle on each powered truck
Bogie
A bogie is a wheeled wagon or trolley. In mechanics terms, a bogie is a chassis or framework carrying wheels, attached to a vehicle. It can be fixed in place, as on a cargo truck, mounted on a swivel, as on a railway carriage/car or locomotive, or sprung as in the suspension of a caterpillar...
through bevel gear
Bevel gear
Bevel gears are gears where the axes of the two shafts intersect and the tooth-bearing faces of the gears themselves are conically shaped.Bevel gears are most often mounted on shafts that are 90 degrees apart, but can be designed to work at other angles as well...
s in an enclosed gearcase riding on the axle between the truck frames. The inboard axle on each truck was then driven from the outboard one by external side (connecting) rods.

In 1897, Heisler received a patent on a three-truck locomotive. As with Class C Shay locomotive
Shay locomotive
The Shay locomotive was the most widely used geared steam locomotive. The locomotives were built to the patents of Ephraim Shay, who has been credited with the popularization of the concept of a geared steam locomotive...
s, the tender rode on the third truck. Unlike the Shay, Heisler's design did not have a continuous string of line shaft
Line shaft
A line shaft is a power transmission system used extensively during the Industrial Revolution. Prior to the widespread use of electric motors small enough to be connected directly to each piece of machinery, line shafting was used to distribute power from a large central power source to machinery...
ing running the length of the engine. Instead, the tender truck was driven by a line shaft above the shaft driving the main engine trucks, connected to it through spur gears. This patent also covered use of a 4-cylinder 'vee four' cylinder configuration.

The Heisler was the fastest of the geared steam locomotive designs, and yet was still claimed by its manufacturer to have the same low speed hauling ability.

The first Heislers were built by the Dunkirk Engineering Company of Dunkirk, New York, at the time producer of their own design of geared locomotive (called the dunkirk), of which the Heisler could be considered an improvement. They did not adopt the Heisler design, but in 1894 the Stearns Manufacturing Company of Erie, Pennsylvania
Erie, Pennsylvania
Erie is a city located in northwestern Pennsylvania in the United States. Named for the lake and the Native American tribe that resided along its southern shore, Erie is the state's fourth-largest city , with a population of 102,000...
started to produce Heislers, and did so until 1904. Reorganised as the Heisler Locomotive Works in 1907, it produced locomotives of the Heisler design until 1941.

Roughly 625 Heislers were produced, of which some 35 still exist. Approximately eight of these survivors are currently operational. A 75 ton 1918 Heisler locomotive is on static display at the Travel Town open air museum
Travel Town Museum
Travel Town Museum is a transport museum within Griffith Park in Los Angeles, California.Travel Town was dedicated on December 14, 1952. There is no charge for museum admission or parking...
in Los Angeles. Ex-Curtiss Lumber Company loco number 2 operates on the Oregon Coast Scenic Railroad during the tourist season. And the 3-truck 90 ton West Fork Logging Co #91 operates on the Mt. Rainier Scenic Railroad in Elbe Washington, who also have a 78 ton 3 truck on static display. Cass Scenic Railroad State Park in Cass, West Virginia operates a 90 ton, 3 truck Heisler built in 1929. Another Heisler two truck locomotive can be found on static display next to the headquarter's building of the former Pacific Lumber Co. in Scotia California. Heisler serial number 1260 built in 1912 (2 truck) is currently running on the Silver Creek and Stephenson historical railroad in Freeport, IL.