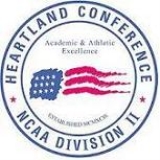 Encyclopedia
The Heartland Conference is an NCAA
National Collegiate Athletic Association
The National Collegiate Athletic Association is a semi-voluntary association of 1,281 institutions, conferences, organizations and individuals that organizes the athletic programs of many colleges and universities in the United States...
Division II college athletic conference founded in 1999. The majority of members are in Texas, with additional members in Arkansas, Kansas, and Oklahoma.

The Heartland Conference sponsors 13 sports, 7 for women and 6 for men. Both men and women compete in basketball
Basketball
Basketball is a team sport in which two teams of five players try to score points by throwing or "shooting" a ball through the top of a basketball hoop while following a set of rules...
, cross country
Cross country running
Cross country running is a sport in which people run a race on open-air courses over natural terrain. The course, typically long, may include surfaces of grass and earth, pass through woodlands and open country, and include hills, flat ground and sometimes gravel road...
, golf
Golf
Golf is a precision club and ball sport, in which competing players use many types of clubs to hit balls into a series of holes on a golf course using the fewest number of strokes....
, soccer, and tennis
Tennis
Tennis is a sport usually played between two players or between two teams of two players each . Each player uses a racket that is strung to strike a hollow rubber ball covered with felt over a net into the opponent's court. Tennis is an Olympic sport and is played at all levels of society at all...
. Men compete in baseball
Baseball
Baseball is a bat-and-ball sport played between two teams of nine players each. The aim is to score runs by hitting a thrown ball with a bat and touching a series of four bases arranged at the corners of a ninety-foot diamond...
and women compete in softball
Softball
Softball is a bat-and-ball sport played between two teams of 10 to 14 players. It is a direct descendant of baseball although there are some key differences: softballs are larger than baseballs, and the pitches are thrown underhand rather than overhand...
and volleyball
Volleyball
Volleyball is a team sport in which two teams of six players are separated by a net. Each team tries to score points by grounding a ball on the other team's court under organized rules.The complete rules are extensive...
.