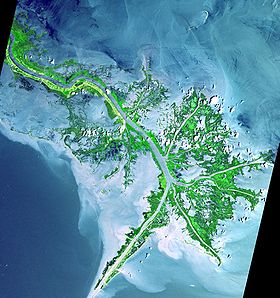 The US Army Corps of Engineers maintains a 45-foot (13.7 m) shipping channel from the mouth of Southwest Pass—20 miles (32 km) downriver from the Head—up to Baton Rouge
Baton Rouge, Louisiana
Baton Rouge is the capital of the U.S. state of Louisiana. It is located in East Baton Rouge Parish and is the second-largest city in the state.Baton Rouge is a major industrial, petrochemical, medical, and research center of the American South...
, the US's farthest inland deep-water port.

During the American Civil War
American Civil War
The American Civil War was a civil war fought in the United States of America. In response to the election of Abraham Lincoln as President of the United States, 11 southern slave states declared their secession from the United States and formed the Confederate States of America ; the other 25...
, Head of Passes was the site of several naval battles. The Anaconda Plan
Anaconda Plan
The Anaconda Plan or Scott's Great Snake is the name widely applied to an outline strategy for subduing the seceding states in the American Civil War. Proposed by General-in-Chief Winfield Scott, the plan emphasized the blockade of the Southern ports, and called for an advance down the Mississippi...
called for a large Union blockade
Union blockade
The Union Blockade, or the Blockade of the South, took place between 1861 and 1865, during the American Civil War, when the Union Navy maintained a strenuous effort on the Atlantic and Gulf Coast of the Confederate States of America designed to prevent the passage of trade goods, supplies, and arms...
of the Confederacy, and included plans to control the Mississippi River. This began in 1861 with a Union blockade stationed at the Head of Passes. This occupation resulted in the Battle of the Head of Passes
Battle of the Head of Passes
The Battle of the Head of Passes was a bloodless naval battle of the American Civil War. It was a naval raid made by the Confederate river defense fleet, also known as the “mosquito fleet” in the local media, on ships of the Union Blockade squadron anchored at the Head of Passes...
, where the blockading forces were temporarily driven from the area. Ships involved in the ensuing conflict at the location include the CSS Manassas
CSS Manassas
CSS Manassas, formerly the steam icebreaker Enoch Train, was built as a twin-screw towboat at Medford, Massachusetts, by James O. Curtis in 1855. A New Orleans commission merchant, Captain John A...
, the USS Vincennes
USS Vincennes (1826)
USS Vincennes was a 703-ton Boston-class sloop of war in the United States Navy from 1826 to 1865. During her service, Vincennes patrolled the Pacific, explored the Antarctic, and blockaded the Confederate Gulf coast in the Civil War. Named for the Revolutionary War Battle of Vincennes, she was...
, and the USS Richmond
USS Richmond (1860)
The USS Richmond was a wooden steam sloop in the United States Navy during the American Civil War.-Service in the Caribbean :Richmond was launched on 26 January 1860 by the Norfolk Navy Yard; sponsored by a Miss Robb. Richmond, commanded by Captain D. N. Ingraham, departed Norfolk, Virginia 13...
.

Port Eads is located at the southern tip of South Pass.

The Head of Passes is the datum from which mileages on the Lower Mississippi River are measured. Algiers Point
Algiers Point
Algiers Point is a location on the Lower Mississippi River in New Orleans, Louisiana. In river pilotage, Algiers Point is simply one of the many points of land around which the river flows—albeit a significant one...
, for instance, is at mile 94.6 AHP (above Head of Passes). Cairo
Cairo, Illinois
Cairo is the southernmost city in the U.S. state of Illinois. It is the county seat of Alexander County. Cairo is located at the confluence of the Mississippi and Ohio rivers. The rivers converge at Fort Defiance State Park, an American Civil War fort that was commanded by General Ulysses S. Grant...
, Illinois
Illinois
Illinois is the fifth-most populous state of the United States of America, and is often noted for being a microcosm of the entire country. With Chicago in the northeast, small industrial cities and great agricultural productivity in central and northern Illinois, and natural resources like coal,...
, is at mile 953.8 AHP. Mileages downstream from Head of Passes are labelled BHP (below Head of Passes).
The source of this article is wikipedia, the free encyclopedia.  The text of this article is licensed under the GFDL.