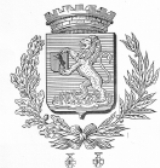 The town enjoys excellent rail connections, with frequent daily services to Lille and Paris, some by High Speed
TGV
The TGV is France's high-speed rail service, currently operated by SNCF Voyages, the long-distance rail branch of SNCF, the French national rail operator....
Line
LGV Nord
The LGV Nord is a French 333-kilometre long high speed rail line, opened in 1993, that connects Paris to the Belgian border and the Channel Tunnel via Lille....
. There is a small international airport, concentrating on business flights, at Merville-Calonne
Merville, Nord
-References:*...
just 12 kilometre / 8 miles away. There is good access to the national Autoroute
Autoroutes of France
The Autoroute system in France consists largely of toll roads, except around large cities and in parts of the north. It is a network of worth of motorways. Autoroute destinations are shown in blue, while destinations reached through a combination of autoroutes are shown with an added autoroute logo...
network connecting Hazebrouck with Dunkirk and Lille
Lille
Lille is a city in northern France . It is the principal city of the Lille Métropole, the fourth-largest metropolitan area in the country behind those of Paris, Lyon and Marseille. Lille is situated on the Deûle River, near France's border with Belgium...
and, less directly, Arras
Arras
Arras is the capital of the Pas-de-Calais department in northern France. The historic centre of the Artois region, its local speech is characterized as a Picard dialect...
, Paris
Paris
Paris is the capital and largest city in France, situated on the river Seine, in northern France, at the heart of the Île-de-France region...
, Calais
Calais
Calais is a town in Northern France in the department of Pas-de-Calais, of which it is a sub-prefecture. Although Calais is by far the largest city in Pas-de-Calais, the department's capital is its third-largest city of Arras....
and Brussels
Brussels
Brussels , officially the Brussels Region or Brussels-Capital Region , is the capital of Belgium and the de facto capital of the European Union...
.