The western third of Harvard Yard, which opens onto Massachusetts Avenue at Johnston Gate, is known as the Old Yard, and around it cluster most of the freshman dormitories. Among these is Massachusetts Hall, which, having been constructed in 1720, is the oldest still-standing building on Harvard's campus and one of the two oldest academic buildings in the United States. Massachusetts Hall and the Wren Building
Wren Building
The Wren Building is the signature building of the College of William and Mary in Williamsburg, Virginia, USA. Along with the Brafferton and President's House, these buildings form the College's Historic Campus....
at the College of William and Mary
College of William and Mary
The College of William & Mary in Virginia is a public research university located in Williamsburg, Virginia, United States...
are both often described as the oldest; the Wren Building was originally built before Massachusetts Hall, but has been destroyed and rebuilt several times. The lower floors of Massachusetts Hall house the offices of the President of Harvard University
President of Harvard University
The President of Harvard University is the chief administrator of the university. Ex officio the chairman of the Harvard Corporation, he or she is appointed by and is responsible to the other members of that body, who delegate to him or her the day-to-day running of the university...
.

Across the Old Yard from Johnston Gate stands University Hall
University Hall (Harvard University)
University Hall is a white granite building designed by noted early American architect Charles Bulfinch on the campus of Harvard University in Cambridge, Massachusetts. It is now a National Historic Landmark....
, and the now-famous statue of John Harvard by Daniel Chester French
Daniel Chester French
Daniel Chester French was an American sculptor. His best-known work is the sculpture of a seated Abraham Lincoln at the Lincoln Memorial in Washington, D.C.-Life and career:...
. The statue has earned the nickname "the statue of three lies" from its inscription, "John Harvard, Founder, 1638". In truth, the statue is not modeled after John Harvard, he did not found the university, and the founding was in 1636. University Hall was the site of the now-famous sit-in and teach-in protests during the late 1960s, while Massachusetts Hall was the site of the more recent 2001 living-wage campaign sit-in. 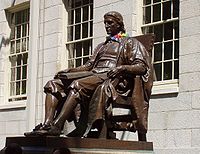 The libraries
Harvard University Library
The Harvard University Library system comprises about 90 libraries, with more than 16 million volumes. It is the oldest library system in the United States, the largest academic and the largest private library system in the world...
located in Harvard Yard are Widener Library, its connected Pusey Library annex, Houghton Library
Houghton Library
Houghton Library is the primary repository for rare books and manuscripts at Harvard University. It is part of the Harvard College Library within the Harvard Faculty of Arts and Sciences. Houghton is located on the south side of Harvard Yard, next to Widener Library.- History :Harvard's first...
for rare books and manuscripts, and Lamont Library
Lamont Library
Lamont Library is one of the primary buildings of the library system of Harvard University, located in the south-east corner of Harvard Yard. It was the first library at Harvard designed primarily for undergraduate students at Harvard College, to relieve pressure in the main Widener Library. It...
, the main undergraduate library. Classroom and departmental buildings include Emerson Hall, Sever Hall
Sever Hall
Sever Hall is a notable building designed by famed American architect H. H. Richardson. It is located on the grounds of Harvard University in Cambridge, Massachusetts, within Harvard Yard, and is now a National Historic Landmark.-History:...
, Robinson Hall, and Boylston Hall. 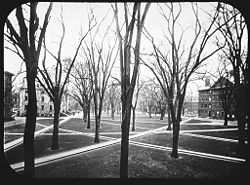 Nestled among Mower, Hollis, Lionel, and Stoughton Halls is the Holden Chapel
Holden Chapel
Holden Chapel is a small building in Harvard Yard on the campus of Harvard University. Completed in 1744, it is the third oldest building at Harvard and one of the oldest college buildings in America.-Early history:In December 1741, Mrs...
, home of the Holden Choirs. Also in this section of the yard stands the Phillips Brooks House, designed by Alexander Wadsworth Longfellow, Jr.
Alexander Wadsworth Longfellow, Jr.
Alexander Wadsworth Longfellow, Jr. was an American architect and nephew of poet Henry Wadsworth Longfellow.-Biography:...
, and home of the Phillips Brooks House Association
Phillips Brooks House Association
Phillips Brooks House Association is a student-run, staff supported public service/social action organization at Harvard College providing a variety of services to the Greater Boston community...
(PBHA), Harvard University's center for service activities. At the southwest corner of the Yard is Lehman Hall, or Dudley House
Dudley House (Harvard College)
Dudley House is one of the thirteen undergraduate "houses" within Harvard College, serving the very few Harvard undergraduates not living in one of the other twelve houses; this includes student's living in the off-campus Dudley Co-ops. It also serves certain graduate students.Dudley House is...
, the administrative unit for non-resident and off-campus students. Next to Lehman Hall is Wadsworth House, a canary-yellow building that houses the headquarters of the Harvard Alumni Association and the university library system. Finally, Loeb House sits on the east side; it is the site of Harvard's governing bodies, the Harvard Corporation and the Board of Overseers
Harvard Board of Overseers
The Harvard Board of Overseers is one of Harvard University's two governing boards...
.