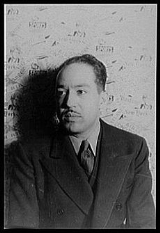 Overview
The Harlem Renaissance was a cultural movement
Cultural movement
A cultural movement is a change in the way a number of different disciplines approach their work. This embodies all art forms, the sciences, and philosophies. Historically, different nations or regions of the world have gone through their own independent sequence of movements in culture, but as...
that spanned the 1920s and 1930s. At the time, it was known as the "New Negro Movement", named after the 1925 anthology by Alain Locke. Though it was centered in the Harlem
Harlem
Harlem is a neighborhood in the New York City borough of Manhattan, which since the 1920s has been a major African-American residential, cultural and business center. Originally a Dutch village, formally organized in 1658, it is named after the city of Haarlem in the Netherlands...
neighborhood of New York City
New York City
New York is the most populous city in the United States and the center of the New York Metropolitan Area, one of the most populous metropolitan areas in the world. New York exerts a significant impact upon global commerce, finance, media, art, fashion, research, technology, education, and...
, many French-speaking black writers from African and Caribbean colonies who lived in Paris
Paris
Paris is the capital and largest city in France, situated on the river Seine, in northern France, at the heart of the Île-de-France region...
were also influenced by the Harlem Renaissance.

Historians disagree as to when the Harlem Renaissance began and ended.

What was the impact of the Harlem Renaissance?

What were some of the characteristics and themes of the Harlem Renaissance?

How and why did the African-American community develop in Harlem?
More
x