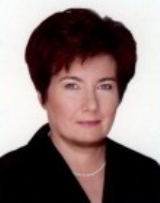 Encyclopedia
Hanna Beata Gronkiewicz-Waltz (ˈxanna ɡrɔnˈkʲevʲit͡ʂ ˈvalt͡s, born 4 November 1952 in Warsaw
Warsaw
Warsaw is the capital and largest city of Poland. It is located on the Vistula River, roughly from the Baltic Sea and from the Carpathian Mountains. Its population in 2010 was estimated at 1,716,855 residents with a greater metropolitan area of 2,631,902 residents, making Warsaw the 10th most...
) is a Polish liberal-conservative
Conservative liberalism
Conservative liberalism is a variant of liberalism, combining liberal values and policies with conservative stances, or, more simply, representing the right-wing of the liberal movement....
politician who has been the Mayor of Warsaw since 2 December 2006. She is the first woman to ever hold this position.

Between 1992 and 2000 she was the Chairman of the National Bank of Poland
National Bank of Poland
Narodowy Bank Polski is the central bank of Poland. It controls the issuing of Poland's currency, the złoty. The Bank is headquartered in Warsaw, and has branches in every major Polish town...
, the central bank
Central bank
A central bank, reserve bank, or monetary authority is a public institution that usually issues the currency, regulates the money supply, and controls the interest rates in a country. Central banks often also oversee the commercial banking system of their respective countries...
of Poland. Resigned to take a position of the Deputy Chairman of European Bank for Reconstruction and Development
European Bank for Reconstruction and Development
Founded in 1991, the European Bank for Reconstruction and Development uses the tools of investment to help build market economies and democracies in 30 countries from central Europe to central Asia. Its mission was to support the formerly communist countries in the process of establishing their...
, a position she held between 2001 and 2004. She was elected to the Sejm
Sejm
The Sejm is the lower house of the Polish parliament. The Sejm is made up of 460 deputies, or Poseł in Polish . It is elected by universal ballot and is presided over by a speaker called the Marshal of the Sejm ....
on 25 September 2005 after receiving 137,280 votes in the 19th Warsaw
Warsaw
Warsaw is the capital and largest city of Poland. It is located on the Vistula River, roughly from the Baltic Sea and from the Carpathian Mountains. Its population in 2010 was estimated at 1,716,855 residents with a greater metropolitan area of 2,631,902 residents, making Warsaw the 10th most...
district, running on the Civic Platform
Civic Platform
Civic Platform , abbreviated to PO, is a centre-right, liberal conservative political party in Poland. It has been the major coalition partner in Poland's government since the 2007 general election, with party leader Donald Tusk as Prime Minister of Poland and Bronisław Komorowski as President...
list.

In the 2006 municipal elections
Polish local elections, 2006
The 2006 Polish local elections were held in two parts. with its first round on November 12 and the second on November 26, 2006. In the election's first round, voters chose 39,944 gmina councillors, 6,284 powiat councillors and 561 deputies to provincial voivodeship sejmiks...
, Hanna Gronkiewicz-Waltz served as Civic Platform's nominee for mayor of Warsaw. On 12 November she gained 34.23%, finishing next to Law and Justice
Law and Justice
Law and Justice , abbreviated to PiS, is a right-wing, conservative political party in Poland. With 147 seats in the Sejm and 38 in the Senate, it is the second-largest party in the Polish parliament....
candidate, former Prime Minister Kazimierz Marcinkiewicz
Kazimierz Marcinkiewicz
Kazimierz Marcinkiewicz is a Polish conservative politician who served as Prime Minister of Poland from October 31, 2005 to July 14, 2006...
. As neither received 50 percent of the vote, a second round election was held on 26 November, where Gronkiewicz-Waltz received 53.18% of the votes, winning the election.

In January 2007, just a few weeks into her term, Gronkiewicz-Waltz was at the center of an affair that could have ultimately cost her the office. A law enacted in 2005 obliged the mayors of Polish municipalities to publicly disclose their own as well as their spouse's financial circumstances. The law requires the successful candidate's disclosure statement to be provided within 30 days after the inauguration, whereas the statement regarding the candidate's spouse is to be submitted within 30 days after the actual election. Gronkiewicz-Waltz submitted her own and her husband's statements on 2 January 2007, exactly 30 days after her inauguration. On 20 January, the newspaper Dziennik
Dziennik Polska-Europa-Swiat
Dziennik Polska-Europa-Świat was a Polish nationwide daily newspaper published by Axel Springer Polska, a division of Germany's Axel Springer Verlag publishing company. It was modelled on Springer's Welt Kompakt, the Berliner-style edition of the Hamburg-published broadsheet Die Welt...
reported that Mr. Waltz's documents had been two days past the deadline, which in his case had been on 28 December 2006. Based on this, Prime Minister Jarosław Kaczyński of the governing Law and Justice
Law and Justice
Law and Justice , abbreviated to PiS, is a right-wing, conservative political party in Poland. With 147 seats in the Sejm and 38 in the Senate, it is the second-largest party in the Polish parliament....
(PiS) party maintained that Gronkiewicz-Waltz's mandate had expired on 28 December 2006, and announced that the local elections would be repeated. Gronkiewicz-Waltz's party Civic Platform argued that the Prime Minister did not have the authority to make this decision, and that the case would need to be examined in court instead. Polish legal experts maintained that by submitting their statements on the same day, Gronkiewicz-Waltz had observed the spirit, even if not the letter of the law. Also, having two different deadlines for the statements could be considered as an unconstitutional legal trap. In the meantime, Civic Platform announced that it would nominate Gronkiewicz-Waltz again, should the elections need to be repeated. On 13 March 2007, Poland's Constitutional Tribunal ruled against the governing Law and Justice party and struck down the controversial law that threatened her and many other public officials with the loss of their positions solely because they did not file paper work on time.

Regarding gay parades in the capital, Gronkiewicz-Waltz has gone back from her predecessor's opposition to them, approving a gay pride parade in the capital. Though gay parades have been officially allowed in the past, they had always met with strong resistance during the term of Lech Kaczyński
Lech Kaczynski
Lech Aleksander Kaczyński was Polish lawyer and politician who served as the President of Poland from 2005 until 2010 and as Mayor of Warsaw from 2002 until 22 December 2005. Before he became a president, he was also a member of the party Prawo i Sprawiedliwość...
as Mayor of Warsaw, particularly from the All-Polish Youth
All-Polish Youth
The All-Polish Youth is a Polish nationalist youth group, formerly affiliated with the League of Polish Families, with a Catholic-National philosophy. Its agenda declares that its aim is to raise Polish youth in a Catholic and patriotic spirit....
movement. Gronkiewicz-Waltz said the parade would pose no threat to morals and pointed to this month's ruling by the European Court of Human Rights that Kaczyński had acted illegally and discriminatory in banning the gay pride marches. http://www.365gay.com/Newscon07/05/051807warsaw.htm