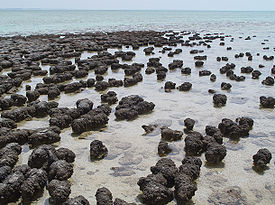 The Marine Reserve covers 1270 square kilometres (490 sq mi). It is one of only a few places in the world where living marine stromatolites can be found. Other locations for stromatolites include an underwater site (6 metres (20 ft)deep) in the Caribbean, Persian Gulf, and in the Great Salt Lake of Utah. Hamelin Pool contains the most diverse range of stromatolites in the world.

The stromatolites in Hamelin Pool were discovered by surveyors working for an oil exploration company in 1956 and were the first living examples of structures built by cyanobacteria. The cyanobacteria living in Hamelin Pool are direct descendants of the oldest form of photosynthetic life on earth. The stromatolites are similar to 3,500 million year old stromatolite fossils found in many places around the world. Stromatolites are an example of the earliest record of life on earth. They are found around the shores, mostly in the neighbourhood of 26°23′S 114°09′E

Hamelin Pool is hypersaline
Hypersaline lake
A hypersaline lake is a landlocked body of water that contains significant concentrations of sodium chloride or other mineral salts, with saline levels surpassing that of ocean water . Specific microbial and crustacean species thrive in these high salinity environments that are otherwise...
(it has approximately double the salinity of normal seawater), providing an ideal environment for the Stromatolites to grow, and inhibiting other marine life which would normally feed on the bacteria. The cyanobacteria live in communities on the sea bed at densities of 3000 million individuals per square metre. They are the simplest life forms to use photosynthesis to provide food and oxygen. They provided the early Earth with most of its oxygen atmosphere billions of years before plants appeared. Very fine particles of solids i.e. sand, crushed shell etc. are trapped by the sticky bacteria, to become cemented with calcium carbonate produced by the bacteria, thereby building up the stromatolite structures. Some structures are pillars up to 1.5 metres (5 ft) high and have taken thousands of years to grow. In the Marble Bar area of Western Australia there are fossil stromatolites approximately 50 metres high and 30 metres diameter. These are estimated to be over 3 billion years old. Typical growth is about 0.5 mm per year.

There are three basic types of Stromatolite, the sub-tidal (always under water) columns and the inter-tidal (exposed to air and sun during low tides) anvil or mushroom shapes depicted in most pictures. Algal mats form in the inter-tidal region and appear as areas of flat black mud flats but are actually living stromatolite.

At Hamelin Pool there is an interpretive boardwalk for tourists to venture out and examine the stromatolite structures. This is the only access area for the general public because of the fragile nature of the environment in the Hamelin Pool.

At the historic Hamelin Pool Telegraph Station and Caravan Park nearby is a museum showing information on the growth of stromatolites and includes what is reported to be the only stromatolites living in captivity (in an aquarium) in the world. The museum also covers the building and operation of the telegraph station back to the 1880s. The Caravan Park caters for meals, refreshments and souvenirs.