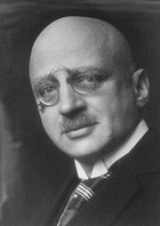 Overview
The Haber process, also called the Haber–Bosch process, is the nitrogen fixation
Nitrogen fixation
Nitrogen fixation is the natural process, either biological or abiotic, by which nitrogen in the atmosphere is converted into ammonia . This process is essential for life because fixed nitrogen is required to biosynthesize the basic building blocks of life, e.g., nucleotides for DNA and RNA and...
reaction of nitrogen gas and hydrogen gas, over an enriched iron
Iron
Iron is a chemical element with the symbol Fe and atomic number 26. It is a metal in the first transition series. It is the most common element forming the planet Earth as a whole, forming much of Earth's outer and inner core. It is the fourth most common element in the Earth's crust...
or ruthenium
Ruthenium
Ruthenium is a chemical element with symbol Ru and atomic number 44. It is a rare transition metal belonging to the platinum group of the periodic table. Like the other metals of the platinum group, ruthenium is inert to most chemicals. The Russian scientist Karl Ernst Claus discovered the element...
catalyst
Catalysis
Catalysis is the change in rate of a chemical reaction due to the participation of a substance called a catalyst. Unlike other reagents that participate in the chemical reaction, a catalyst is not consumed by the reaction itself. A catalyst may participate in multiple chemical transformations....
, which is used to industrially produce ammonia
Ammonia
Ammonia is a compound of nitrogen and hydrogen with the formula . It is a colourless gas with a characteristic pungent odour. Ammonia contributes significantly to the nutritional needs of terrestrial organisms by serving as a precursor to food and fertilizers. Ammonia, either directly or...
.

Despite the fact that 78.1% of the air we breathe is nitrogen
Nitrogen
Nitrogen is a chemical element that has the symbol N, atomic number of 7 and atomic mass 14.00674 u. Elemental nitrogen is a colorless, odorless, tasteless, and mostly inert diatomic gas at standard conditions, constituting 78.08% by volume of Earth's atmosphere...
, the gas is relatively unavailable because it is so unreactive: nitrogen molecules are held together by strong triple bonds
Chemical bond
A chemical bond is an attraction between atoms that allows the formation of chemical substances that contain two or more atoms. The bond is caused by the electromagnetic force attraction between opposite charges, either between electrons and nuclei, or as the result of a dipole attraction...
. It was not until the early 20th century that the Haber process was developed to harness the atmospheric abundance of nitrogen to create ammonia, which can then be oxidized
Redox
Redox reactions describe all chemical reactions in which atoms have their oxidation state changed....
to make the nitrate
Nitrate
The nitrate ion is a polyatomic ion with the molecular formula NO and a molecular mass of 62.0049 g/mol. It is the conjugate base of nitric acid, consisting of one central nitrogen atom surrounded by three identically-bonded oxygen atoms in a trigonal planar arrangement. The nitrate ion carries a...
s and nitrite
Nitrite
The nitrite ion has the chemical formula NO2−. The anion is symmetric with equal N-O bond lengths and a O-N-O bond angle of ca. 120°. On protonation the unstable weak acid nitrous acid is produced. Nitrite can be oxidised or reduced, with product somewhat dependent on the oxidizing/reducing agent...
s essential for the production of nitrate fertilizer and explosives.

Positive and negative influences of the Haber process

What is the difference between the kinetic and equilibrium properties of the haber process?

What is the haber process protaining to the nitrogen cycle

What are the positive and negative influences of Haber process?

What factors affect the rate during the haber process ?
More

POSITIVE INFLUENCE OF THE HABER PROCESS

What are the positive and the negative influences of the haber process in the 1900s?
More
x